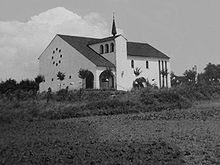 Christ the King Church around 1955

The Catholic Church Christ König in Holzlar , a part of the Bonn district of Beuel , was the first church building to be built in Holzlar.

In 1925, an initiative arose in Holzlar to build its own church near the school. The plan initially failed because of the costs.

Again in 1951 a citizens' meeting took up the church building issue. On July 22, 1951, a working group was formed with the founder of Kautex-Werke and then mayor Reinold Hagen as chairman. Once again, the best place for the church was the proximity of the school. The approximately 5000 m² property was acquired with the help of the Archdiocese of Cologne and Reinold Hagens. The plan approved by Cologne was drawn up by Hagen's brother Hermann, who also took over the construction management.

Construction began on June 20, 1952. Students and their teacher dug a trench to sample the soil. The excavation work followed on January 15, 1953.

On Sunday, June 28, 1953, Dechant Rösgen laid the foundation stone . The Holzlar church was completed that same year. The times for Sunday mass, which the clergy from Pützchen were supposed to hold initially , were set at 8.30 a.m. and 10 a.m. On December 13, 1953 , Prelate Lewen from Cologne authorized the church. The first school service took place three days later. The consecration of the Christ the King Church took place on April 19, 1954 by Auxiliary Bishop Joseph Ferche .

In 2000, a prayer, teaching and dance room was added; in 2008 colorful windows were installed.

In 1988 the company Kleuker Orgelbau , Brackwede, built an organ with 19 registers (1314 pipes ) on the gallery above the church entrance  .

The celebration of the consecration of the bells on December 6th was celebrated in the nave . Through donations, four bells were there that Dechant Rösgen blessed: the 350 kg Christ-König-Bell, donated by the staff of the Kautexwerke, the Marienglocke (270 kg), the Margaretaglocke (140 kg) and the Antoniusglocke (100 kg). With their striking notes b 1 , c 2 , es 2 and f 2 they result in the opening notes of the chorale Christ ist erupt . For each bell, godparents were drawn in special meetings so that all four districts were considered.

The wooden road cross from 1816 called “Boomskröks” was once one of the seven (later eight) crosses of the Holzlar footfalls . It was built in 1816 on the corner of Hauptstrasse and Mühlenweg. The cross was repositioned several times and last stood on the corner of Heideweg and Hauptstraße, where it was badly destroyed in a traffic accident. The remains were recovered by the Holzlar bachelors and given to the church. It is recorded under the number A 3230 in the list of architectural monuments in the Bonn district of Holzlar .