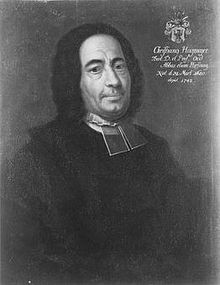 Christian Hagmaier in a picture from 1742 in the Tübingen Professorengalerie

Christian Hagmaier (born March 31, 1680 in Blaubeuren ; † January 4, 1746 in Hirsau ) was a German Protestant theologian and professor, rector and vice-rector at the University of Tübingen .

Christian Hagmaier matriculated at the University of Tübingen in 1699 and received his Bacc there in 1700 . art. and in 1702 his Mag. art. He completed a degree in theology. In 1704 he passed the theological exam. He became vicar in Wildberg . He was Kemnat and informator of the later full professor of theology Johann Rudolf Osiander . In 1706 he became a repetitionist and in 1711 a deacon in Tübingen. In 1716 he got a position as a full professor for logic and metaphysics in Tübingen. In 1726 he was promoted to Dr. theol.doctorate and became associate professor for theology (4th chair), in 1730 full professor for theology (3rd chair). In 1741 he had to resign from teaching for health reasons. He was councilor and prelate in Hirsau, while retaining the title and rank of full professor of theology. In 1721 and 1738 he was rector and in 1733 prorector of the University of Tübingen. From 1716 to 1725 he was rector of the Tübingen Contubernium ( Burse ). His portrait hangs in the professors' gallery in Tübingen .