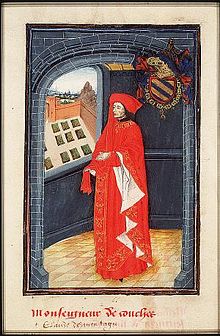 He was the son of Jean de Montaigu, Seigneur de Couches, Saint-Péreuse , Sully and Marigny, and Jeanne de Mello , Dame d ' Époisses . Through his father he was a descendant of Alexandre de Bourgogne, Seigneur de Montaigu († 1205), a son of Duke Hugo III. of Burgundy .

He married on February 22, 1432 Louise de La Tour († 1472) from the house of La Tour d'Auvergne , daughter of Bertrand de La Tour and Marie de Montgascon, Countess of Auvergne and Boulogne ; the marriage remained without heirs. However, Claude de Montaigu had an illegitimate daughter, Jeanne, from Gilette Orude from Couches, whom he had legitimized in 1460 by the Duke of Burgundy and in 1461 by the King of France, and whom he shared with the castles of Bourbilly ( Vic-de-Chassenay ) and Sully ( Sully (Saône-et-Loire) ) equipped. Jeanne married Hugues Rabutin, Seigneur d'Épiry - the Bussy-Rabutin family and thus also the Marquise de Sévigné came from this marriage .

Claude de Montaigu seems to have taken part in the campaign that Louis de Chalon led in the Dauphiné in 1430 and which ended with the defeat of Anthon - Claude de Montaigu was captured and was only freed in 1432 by paying a ransom. Around 1438, after the death of his father, he became a Burgundian counselor and chamberlain; In 1443 he took part in the meeting in Besançon, in 1450 in the Pas d'Armes of La Fontaine des Pleurs and in 1453 in the Battle of Gavre . He fell on March 14, 1471 at the Battle of Buxy.

Claude de Montaigu was one of the richest Burgundian nobles. He had the castle rebuilt in Couches, where he housed Charles the Bold in 1461 ; In 1469 he founded a chapter here. On the chapter of 1468 he was accepted into the Order of the Golden Fleece.