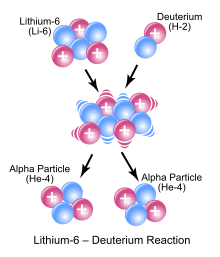 The compound core is created by the complete union of the projectile particle (e.g. proton , neutron , alpha particle ) with the hit core (target core). Due to the gain in binding energy , it is in an excited state of high energy and can have a high total angular momentum .

After a lifetime of about 10 −19 to 10 −15 s, it then decays into two or more nuclei or particles, or it remains with the capture of the projectile particle and the binding energy gained is emitted as a gamma quantum. The decay does not depend on how the intermediate nucleus was formed. For example, if there are several decay channels, their frequency components (branching ratios) are always the same. This could be confirmed experimentally in cases where the same intermediate nuclei were generated by different reaction pathways. To put it clearly, the intermediate nucleus “already forgot” how it came into being when it decayed - apart from conserved quantities such as energy, angular momentum and parity. This corresponds to the fact that even a service life of 10 −19 s is much longer than the time that the projectile would need to “cross” the target core.

In the simplest case (in the final state only two nuclei / particles) the nuclear reaction can be written as follows:

The angular distributions of the products in the center of gravity system are always mirror-symmetrical to the 90 ° direction as a result of the conservation of angular momentum. If such an angular distribution is found, it is therefore an indication of this reaction mechanism.

The intermediate core can also decay “back” into the same channel from which it was formed, ie

The inter-nucleus reaction model is particularly applicable to projectile energies which are significantly below the binding energy of a nucleon in the target nucleus (on average approx. 9 MeV ). In addition, the absorption a + X → Y * takes place preferentially (its effective cross-section is therefore particularly large) when the projectile energy is chosen in such a way that one of its energy levels in the continuum is reached in the possible intermediate core Y, i.e. when there is a resonance comes. This can be seen from a maximum of the excitation function with a shape according to the Breit-Wigner formula . It is therefore an indication of intermediate nucleation when relatively narrow resonances are observed, because according to Heisenberg's uncertainty principle, narrow resonances correspond to a long average life (see also decay range ).

Reactions such as induced nuclear fission , the second phase ( nuclear evaporation ) of a spallation and particle capture reactions with gamma emission can also be understood according to the inter- nuclear model. The deuterium-tritium fusion reaction , which is used as a source of fast neutrons and as an energy source, also takes place via a helium -5 intermediate state.

The compound core reaction model was proposed by Niels Bohr in 1936. The further development of nuclear physics later produced other reaction models, which are necessary to explain the observations, especially with higher projectile energies.