The River Dan ( Hebrew דן dan ; Arabic اللدان, DMG al-Liddān ) is next to Hazbani and Banyas one of the three source rivers of the Jordan . 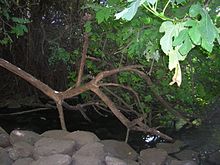 The source of the Dan is the largest karst source in the Middle East with an average annual pouring of 240 million cubic meters . Until 1967, the Dan spring was the only Jordan spring on Israeli territory. Since the annexation of the Golan Heights , which is not recognized internationally, and the expansion of the northern district , the banyas source has also been controlled by Israel.

The Dan itself is only about 20 kilometers long and connects at the northern end of the Hule Plain with Hazbani and Banyas to the Jordan.

Due to the abundance of water, lush vegetation could develop around the source and on the river; the area is now a nature reserve.

Immediately at the source is the Tel Dan with excavations of the ancient city of Dan; Kibbutz Dan is also nearby .