Dan Wesson was the nickname of Daniel B. Wesson II , the founder of the company. He was the great-grandson of Daniel Baird Wesson, one of the founders of Smith & Wesson (S & W), and lived from 1916 to 1978. He worked for S & W from 1938 to 1963, but from 1948 onwards he also ran a tool making company. When S & W was sold by the family in 1963 , he left the company and dedicated himself to his own business. Even after his death, the name Dan Wesson was retained as a brand name for the weapons.

While Daniel B. Wesson II was the founder of the company, Karl R. Lewis was responsible for the development of the Dan Wesson revolver, which was the focus of development. The majority of the patents came from Karl Lewis, from whom Dan Wesson later took over the rights of use. In total, only seven patents have been registered by the Dan Wesson company itself.
Due to the fact that the enthusiastic technicians repeatedly suppressed commercial aspects, the company's history was characterized by numerous problems and changes of ownership. This meant that production was temporarily suspended, the company lay idle and had an uncertain future.

CZ took over the company in 2005. New products and spare parts for old models were still available; however, only pistols based on the M1911 were imported to Europe . 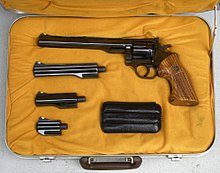