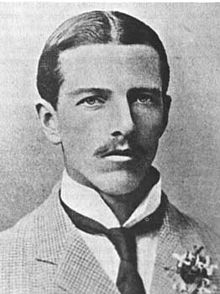 David Carnegie was the fourth son of James Carnegie, 6th Earl of Southesk and second wife Susan Catherine Mary, daughter of the Earl of Dunsmore. He received his education at the Charterhouse School and at the Royal Indian Engineering College in Staines near London. For a short time he worked on a tea plantation in Ceylon , today's Sri Lanka. 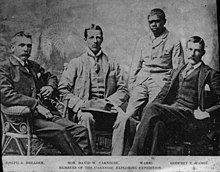 In September 1892 he traveled with Percy Douglas, 10th Marquess of Queensberry to the gold fields at Coolgardie in Western Australia . Carnegie found some gold there.

Between February 1894 and March 1895 he undertook two privately financed expeditions to search for gold deposits.

On July 9, 1896 he started from Coolgardie with the Carnegie Expedition, his most important expedition in search of a direct route from Coolgardie to the Kimberleys . He followed the path of the expeditions of Peter Warburton from 1872 to 1873 and John Forrest from 1874. His team consisted of three other whites, Joseph Breaden, Godfrey Massie and Charles Stansmore, and one Aboriginal , Warri. The expedition participants had eight camels, only one riding camel and provisions for five months. He crossed the Gibson Desert and reached the Great Sandy Desert on September 16 and Halls Creek on December 4 . The return began on March 22, 1897 and he reached Coolgardie in early August after having covered a distance of 4,828 kilometers in 13 months. Stansmore was killed in the course of the expedition because he accidentally shot himself.

When he returned to England in 1897, he received the Gill Medal of the Royal Geographical Society for his expeditionary performance . In 1898 he published a book called Spinifex and Sand . In December 1899 he went to the north of Nigeria and was hit by a poisoned arrow and died on November 21, 1900 during a small skirmish in Kerifi in northern Nigeria.

David Carnegie was one of the most experienced and successful explorers in Australia of his time. His methods have been criticized. On the expedition on which he reached the inner deserts of Australia, he was known for taking Aborigines prisoner and giving them salt meat to eat, in order to elicit the positions of drinking water points from them when they were thirsty.

He died at the age of 29 and was buried near Lokoja in Nigeria. A memorial stone was erected for him in Brechin Cathedral in Scotland. Also, a replica has been in St George's Cathedral in Perth since 1925 . His sister published his letters from Nigeria in 1902.

Carnegie Station and the David Carnegie Road leading to it , an outback track in Western Australia , were named after him. In Perth in St Georges Terrace , a bronze plaque was affixed to his credit.

In April 2004 the collection of his personal travel diaries and original drawings was sold in Sydney. The price was 135,000  Australian dollars , at that time around 84,000 euros.