The doctor's house is located in Bremen , Burglesum district, Werderland district, Lesumbroker Landstrasse 110. The house was built in 1770 (inscription). It has been a listed building in Bremen since 1993 . 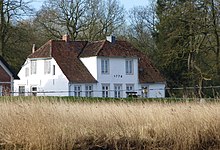 Behind the dike, seen from the right bank of the Lesum

The single-storey, plastered, simple house with a half-hip roof and two broad, two-storey, hipped central risalits and a two-winged rococo door was built around 1770 in the Baroque era, also with classicism, for the doctor Carl von Ransfeld as his summer residence. In the garden there should still be elements of a representative design, such as the remains of garden sculptures.
The State Office for Monument Preservation Bremen wrote: "The overall appearance of the building, which is well-proportioned in its overall appearance and restrained in its individual design, is typical for a country estate from the end of the 18th century"
Today (2018) the house is probably still used for residential purposes.

The Spiegelhof farmhouse from 1667, Lesumbroker Landstrasse 220, is also a listed building.