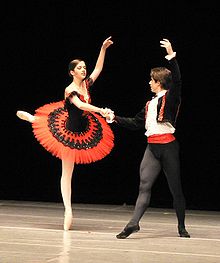 Don Quichotte is a ballet by the choreographer Marius Petipa to the music of Léon Minkus . The libretto is based on the novel Don Quixote by Miguel de Cervantes .

The characters of Don Quixote and his companion Sancho Panza are only marginally incorporated into the ballet plot. The ballet is mainly about love between the beautiful landlady Kitri and the young barber Basil.

A hut in the Spanish province

Don Quixote wakes up from a nightmare and calls his friend Sancho Panza. In his mental derangement he wants to go out to free the maiden Dulcinea, of whom he dreamed, from the hands of the giants.

The market square of a village

The beautiful and witty Kitri, the innkeeper’s daughter, loves Basil, who makes his living as a barber. Kitri's father, however, doesn't like poor Basil and would rather marry her off to old, idiot, but rich Gamache. However, Kitri and Basil sneak their father’s marriage blessing anyway and finally flee the village.

Kitri and Basil find shelter with the gypsies who camp on the fields in front of the village. They are pursued by Gamache and Don Quixote, but not recognized due to their disguise as gypsies. When a gust of wind sets the nearby windmills in motion, Don Quixote believes he is facing the giants. When trying to fight against them, he is hit on the head and faints.

In the dream Don Quixote the wine goddesses (dryads) and their queen Dulcinea appear. Kitri and the messenger of love Amor are also part of the entourage.

Kitri and Basil secretly return to their village, where Kitri's father finally officially allows the marriage.

Kitri and Basil celebrate their wedding with a big party. 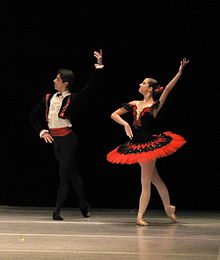 The imitation of Spanish dance styles is unmistakably built into the choreography. Again and again the dancers show poses and movements that are borrowed from flamenco or other Spanish folk dances. Typical poses are with the hand resting on the waist or with the arms straight (the arms are usually slightly bent in classical ballet). The posture in the La Faraona style from Flamenco can also be seen: the head and legs are in profile, while the upper body is turned towards the audience. Large parts of the work are so-called character dance . The dancers do not wear ballet shoes, but rather high heels and costumes based on traditional clothing.

Some parts of the work are particularly well-known and are presented in ballet evenings or in competitions regardless of the context of the piece:

With castanets on his hands, Kitri dances at breakneck speed.

This variation is sometimes shown in the slave pas-de-deux from Le Corsaire .

The mixture of technical demands and Spanish character poses is what makes this pas de deux so attractive. 32 fouettés en tournant by the dancer are inserted into the coda , the artistry of which the soloist sometimes enhances by using a fan, various arm positions or multiple turns.