It was dark, the moon shone brightly 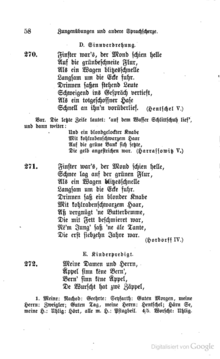 The oldest known written variants from folk things from the Kingdom of Saxony, collected at the Thomas School by Oskar Dähnhardt . First issue. Teubner, Leipzig 1898 No. 270 and No. 271

It was dark, the moon was shining bright is a poem by an unknown author.

The poem is shaped by contradicting statements, paradoxes . This begins in the title and continues with numerous oxymora in the text.

The different variants are particularly similar in the first stanzas, which read something like this:

It was dark, the moon shone bright
the green corridor covered with snow ,
than a car at lightning speed,
drove slowly around the corner.

Inside sat people standing
silently absorbed in conversation,
than a dead bunny
Skating on the sandbar.

And a young man with blond curls
with coal-black hair
sat on a green box,
which was painted red.

Next to him an old quirk
barely sixteen years old
in my hand a butter sandwich
which was coated with lard.

Some versions, especially the earliest start Finster rather than dark . Newer forms replace the car with a car , and this drives around a round corner , which, however, does not fit into the meter . The passengers of the car in the second stanza are often the blond boy or the old box , especially in early forms , and the people standing outside are sitting outside or are not mentioned. The dead hare either runs or gallops very quickly across the fields or skates on the ice , the meadow or a sandbank or a sandberg . In some cases the cause of death of the hare (if mentioned) is not mentioned, in some more recent versions it is already stuffed . The young man with blond curls sits on benches or boxes. The box , which with two syllables fits better into the meter, was already used in early versions, but the bank or bank is just as common . The seats are painted in different colors: green / yellow, green / red or black / blue are well-known early combinations. Sometimes the boy just leans against the bench. The old quirk becomes an old box or old aunt between the ages of sixteen and twenty and the butter stulle (or in Saxon butterbemme ) is repackaged as a sandwich or sandwich in the newer versions, and in older versions it is smeared with fat instead of lard .

It was dark, the moon shone bright
Ice lay on the green hallway
As a car with lightning speed
Slowly drove around the corner.

A blond youth was sitting in it.
Whose raven hair
From the fullness of his years
Was already completely white.

The versions are based on an original poem with two or three stanzas and have been expanded over time, sometimes to sixteen stanzas. So today there are countless variations that can hardly be ascribed to a single poem.

The origin of the poem is not clear, but is suspected in the Saxon vernacular of the 19th century. Various attributions to specific authors are usually based on mix-ups, text similarities or the editing of collections of poems. Goethe , Lewis Carroll (the author of poems such as Jabberwocky ) and Christian Morgenstern are often named as alleged authors, but this cannot be proven. A reference to Goethe is not completely excluded:

“Adelheid (turned towards the window) . It's not dark outside. The moon shines brightly. [...] "

However, it is unknown whether the joke poem is a parody of this passage, whether there is a coincidental similarity, or whether the poem was popularly circulated much earlier than it is documented today and Goethe himself alluded to it. The theater critic Paul Lindau used the line “It was pitch dark, the moon shone bright” in a theater review as early as 1875 to criticize contradictions in the plot.

The oldest known writings as multi-strophic poems are listed in Volksthümliches from the Kingdom of Saxony, collected at the Thomas School by Oskar Dähnhardt . First issue. Teubner, Leipzig 1898, as no. 270 with the indication of origin "Hentschel V.", with the variant "Harrassowitz V." and no. 271 with the indication of origin "Hordorff IV.". In the following years the poem was distributed in numerous prints and variants. The most widespread version today was influenced by James Krüss , who published the songbook Shepherd's Flute in 1965 .