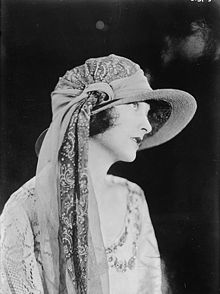 Eleanor Boardman (born August 19, 1898 in Philadelphia , Pennsylvania , † December 12, 1991 in Santa Barbara , California ) was an American actress of the silent and early talkies era .

Eleanor Boardman was first known as the Kodak Girl through a successful Eastman Kodak advertising campaign . After a few years on the stage, she moved to Hollywood in the early 1920s , where she quickly established herself as a household name. In 1923 she was named one of the WAMPAS Baby Stars and after switching to MGM , her successful rise to one of the stars of society began. She had her best-known role in 1928 under the direction of her first husband King Vidor in the socially critical film Ein Mensch der Masse .

The actress made the leap to talkies with no problems, but in 1931 her contract with MGM was no longer renewed and Boardman retired into private life after a few roles in B-films . After divorcing King Vidor, she married the director Harry d'Abbadie d'Arrast in 1940 . The marriage was overshadowed by the never-ending custody disputes between Boardman and Vidor over their two daughters. After d'Arrast's death, Boardman retired to a large estate in California.