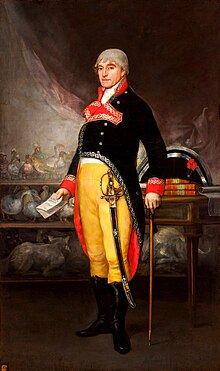 Félix Francisco José Pedro de Azara y Perera (born May 18, 1746 in Barbuñales near Barbastro , † October 20, 1821 in Huesca ) was a Spanish officer, naturalist and surveyor . He was the younger brother of the diplomat José Nicolás de Azara . Azara explored the La Plata countries between 1781 and 1801 and is considered one of the most important Spanish South American researchers.

Azara studied law and philosophy in Huesca, but soon decided to pursue a military career. After training in mathematics and technology in Barcelona , he became an engineer-lieutenant in the Spanish army in 1767 and took part in the Spanish attack on Algiers in 1775 . Despite a serious wound, he was promoted to brigadier general.

In 1777 Spain and Portugal signed the First Treaty of San Ildefonso and in 1778, in the Peace of El Pardo, they agreed that a military expedition should explore the common border regions of their South American possessions. The boundary should be precisely defined. Azara took part under José Varela y Ulloa in the expedition, which had its starting point in 1781 in the viceroyalty of the Río de la Plata .

Azara became the most important participant in the expedition. He stayed in South America for 20 years, of which he spent 14 years exploring the largely untouched areas of the Río de la Plata north to the Amazon and the confluence of the Río Mamoré with the Guapore . He carried out measurements, drew exact maps and described the flora and fauna of the La Plata and Amazon areas. An attempt by a viceroyalty official to steal the maps created by Azara and pass them off as his own work failed. There were too many Azara employees who knew about his research that the fraud was exposed.

Azara was considered a keen observer and attentive researcher. Later in life, however, he self-critically noted that for all his research he was unable to understand the mentality and needs of the Indians in the areas he was exploring.

In 1801 Azara returned to Europe and visited his brother José Nicolás de Azara, who was the Spanish ambassador in Paris at the time. There he also met several respected researchers with whom he was in correspondence for the rest of his life. In 1809 Azara's book Voyages dans l'Amerique Méridionale depuis was published in 1781 jusqu'à 1801 .

When Napoleon invaded Spain in 1808, Azara offered his services against the French, which José de Palafox y Melci as Commander-in-Chief of Aragon, however, refused in view of Azara's advanced age. Nevertheless, he was involved in the Spanish resistance against Napoleon. After the liberation in 1814, Azara devoted himself to the agricultural reconstruction of Aragon after the devastation of the war until his death in 1821 .

The following were named after Félix de Azara: