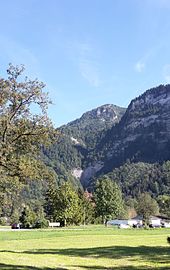 Fallbach and part of the Feientobel in Dornbirn seen from "In Steinen" (Bremenmahd) with little water. On the right a part of the Breitenberg and in the middle behind it, the Staufen

The Fallbachtobelweg is a path that runs parallel to the Fallbach . It joins a hiking trail to the Kühberg above the Fallbachtobel waterfall (at approx. 670  m above sea level, it joins the ladder path ) and in the uppermost part of the Fallbachtobel trail you can branch off into the Feijatobel . Today, the path is mostly only used as a hiking trail by locals and is rarely shown on hiking maps of the region. The area around the Breitenberg has been known to be geologically troubled for centuries. The path is little frequented and difficult to recognize, rockslides and fallen trees keep laying the path.

From the Dornbirn district of Wallenmahd , the imposing 45 meter high waterfall (at GwKm 3.225 of the Fallbach) pointing in a north-westerly direction, which is visible from afar and the Fallbachweg leads past, is striking. During longer dry periods, the waterfall thins out considerably. The waterfall is mainly fed by the 5.47 km long Fallbach .

The Fallbachtobelweg is entirely on the Dornbirn municipality.

In the upper part of the Fallbachtobelweg, ropes and holding irons are sometimes attached. For safety reasons (risk of slipping), the walking direction is from below ( Haslach , 443  m above sea level ) to the top (highest point Kühberg, 950  m above sea level ). The Fallbachtobelweg is not an official hiking trail and the upper part of the path from the waterfall should not be walked on, even in light rainy weather and snow conditions. Very good shoes, surefootedness and a head for heights are required. Short stretches are to be scrambled. The path is generally not suitable for children.

Retention basin at the beginning of the Fallbachtobelsweg near Haslach

The destination is the Kühberg inn

The path leads from Gasthaus Haslach in a south-west direction on the paved road over the bridge over the Fallbach . After this bridge, swiveling to the left, the path leads in a south-easterly direction as a forest path along the Fallbach stream (on the left a large retention basin ) , which has been developed into a road, up towards the clearly visible large waterfall. After about 250 meters, the forest path branches off and the Fallbachtobelweg continues on the left ( Steckenweg on the right ). It goes quite evenly upwards now in a south-east direction and the path largely maintains this direction in the following. Under certain circumstances the bank of the Fallbach has to be changed several times after leaving the forest path (wind throws). The path becomes increasingly difficult to recognize in its course. Shortly before the waterfall, a narrow footpath on the left bank leads steeply up the slope, where you have to climb a little about 30 to 40 meters in altitude . Sometimes red dots or arrows on rocks or trees can be seen as markings. There is a risk of falling in this area. Ropes and holding irons are only partially installed and their durability cannot be trusted. At the height of the upper edge of the waterfall (approx. 670  m above sea level ) the path becomes a little wider and is better maintained and there are various alternatives to further ascent (Feijatobel, Karren (mountain) / Karrenseilbahn , Kühberg, Staufenalpe etc.) or descent (e.g. into Mühlebach ) available.

Almost the entire route leads through the forest .

The closest hiking base is the Gasthaus Haslach in Haslach or the Gasthaus Kühberg on the Kühbergalpe (Dornbirn) or the Staufenalpe (Hohenems). The hike from Haslach to the hiking trail to the Kühberg / Feijatobel entry takes about an hour.

Three water pipes are said to have branched off from the Fallbach since early modern times . The first Hatler aqueduct from the Fallbach into the village is said to have been built around 1616. Another line went to Bad Haslach and a "large" line to a company in Wallenmahd , which was founded in 1824. How far the Fallbachtobelweg served in the lower area to the waterfall for the setting and maintenance of these water pipes has not yet been investigated in more detail. The Fallbachtobelweg is still required today to maintain the retention basin on the Fallbach. Immediately at the beginning of the path in Haslach, there is a base for torrent and avalanche control .