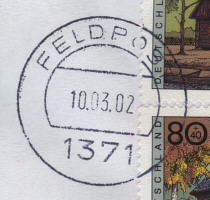 The history of the field post in Germany begins in the second half of the 18th century in Prussia , whose armies were involved in various military conflicts at that time. Based on a need for organized communication that was recognized as necessary, detailed instructions on field post were issued at the beginning of the War of the Bavarian Succession in 1778. In the following years, other German states such as Bavaria , Württemberg and Baden also developed their own field post systems.

With the merging of the separate armed forces to form the Reichswehr and later the Wehrmacht , the separate field post systems were also merged. In the early years of the Federal Republic of Germany , the armed forces did not have an independent postal organization, and field post was only tried out in the GDR as part of a maneuver in autumn 1970. Today's Bundeswehr has been organizing the supply of mail to its units under the name Feldpost again since 1982 .

For the historical development of the field post of the German armed forces from the beginning until today see the corresponding sub-articles: