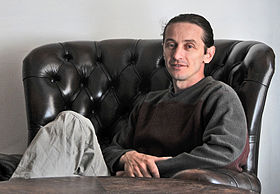 Florin Balaban (born August 16, 1968 in Nicoreşti ) is a badminton player , cartoonist and painter from Romania .

Balaban's first win of a national championship in men's singles dates back to 1990. He was able to defend this individual title the following year. In 1992 he was only successful in doubles with Florentin Banu , with his doubles partner challenging him for the single title. A year later, Florin Balaban won both the single and the double title. In 1994 he was the last Romanian champion, and again with Florentin Banu in doubles.

Internationally, he was the only Romanian to date to qualify for an Olympiad in badminton . At the 1992 Summer Olympics in Barcelona he was eliminated in the first round against Anil Kaul from Canada in two sets and finished in 33rd place.

After his sporting career, he began a career as a cartoonist and painter . Today he lives and works in Luxembourg .

After méi elephants from the Ronn with Fränz Colling.