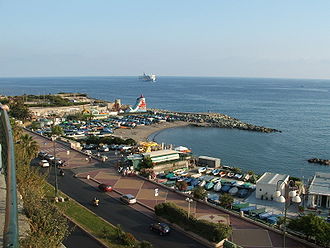 The coast of Foce

Foce is a residential area in the Italian port city of Genoa . The district is located directly on the Ligurian Sea , east of the city center, in the estuary of the Bisagno River . In fact, the term Foce with estuary is translated into German.

Foce can be reached from Genova Brignole station via Viale delle Brigate Partigiane and Viale Brigata Bisagno . The distance to this is about 1.5 kilometers.

The district belongs to the Munizip VIII Medio Levante . It in turn consists of the hamlets of Foce and Bisagno and has a population of 16,288 inhabitants.

According to a study by the Italian daily Il Secolo XIX from 2007, 6500 people lived in the Foce district, of whom 3.32% were older than 65 years. This makes Foce the district with the oldest population in Genoa.