The common scorpion fly ( Panorpa communis ) is a species of beaked fly , the males of which have a clearly thickened genital segment at the end of the abdomen, which is usually carried curved upwards and is reminiscent of the sting of a scorpion . This is what the German name of this species and the whole family of scorpion flies (Panorpidae) is based on. In December 2017, the common scorpion fly was selected as Insect of the Year 2018 . 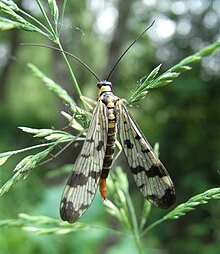 The four wings of the common scorpion fly are veined like a network, darkly spotted and have a wingspan of 25 to 35 mm. The mouthparts are elongated like a beak. The last abdomen segments are red in both sexes. In terms of shape, however, they show a pronounced sexual dimorphism . In the females this part of the body is a slightly upwardly curved laying tube, while the males have a strongly upwardly curved, pincer-like mating organ that is reminiscent of the sting of a scorpion. The anterior abdominal segments are black and yellow, the black markings only being present on the top and bottom. These segments are yellow on the flanks. The animals reach a body length of up to three centimeters.

As habitats , the common scorpion fly prefers dark and moist habitats such as B. Forests or forest edges . The common scorpion fly feeds on mostly dead or weakened insects. When foraging for food, the webs are also sought out by spiders and the insects trapped in them are eaten, a behavior known as kleptoparasitism . The visit of the web by the scorpion fly is usually noticed by the spider. Often this also approaches the scorpion fly, but then lets it go unmolested. The reason for this unusual behavior remains unexplored. 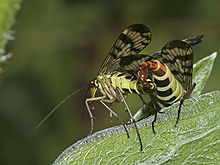 In order to attract the females, the males courted with the genital segment spread apart and stretched upwards. As with other Panorpa species, a genital pocket is everted and the wings are fanned, but no pheromones are released. The localization of the males by the females is therefore purely optical. Mating with a lured female is usually preceded by a long courtship in which the male approaches the female with flapping wings and trembling movements of the abdomen. This initially reacts with a wait and then with a short escape. If the female is willing to mate, it then moves again attractively close to the male, whereupon the male approaches again. This behavior is repeated several times until the male gives the female a “wedding present”. This can be a chunk of food or a protein-containing secretion droplet that the male can excrete from his salivary glands. The female begins to consume the present of food. During this time, the male grasps the female's abdomen with his forceps-like copulation organ. The copulation takes place in a V-position and is often repeated several times. Mating can drag on for up to two hours, depending on the amount of food gifts the male can give to the female. Then the female judges the male. Well-nourished males, who can secrete large amounts of secretion droplets, can mate longer and pass on their genes more successfully than weaker males. Under certain circumstances it can happen that a male succeeds in copulating without a “wedding present”. In these cases, however, the copulations are usually very short (15-30 minutes), as the females often shake off their copulation partner.

The females usually mate with several males and then after about four days lay a total of 50 to 60 eggs in different places - twelve to twenty each - in the ground. After around ten days, the eggs hatch into the larvae , which, like the adults, feed on dead or weakened insects and look like caterpillars. During the larval stage, the larvae molt three times. The prepupal stage begins around four weeks after hatching, and depending on the time of year, it lasts two weeks to eight months. The larvae that develop late in the year overwinter in the prepupal stage, while the larvae that develop early in the year pupate relatively quickly and hatch in the same year as a finished insect. After leaving the doll's shell, it takes around three hours for the animal to dry and color.

There are four other scorpion flies of the genus Panorpa in Germany.

The very common Panorpa vulgaris differs by the larger spot on the wings near the base of the wing, which extends over two wing cells. In the common scorpion fly, this spot only extends over one cell or is sometimes completely absent.

The males of the very common German scorpion fly ( Panorpa germanica ) can be easily recognized by the large thorn-like extension on the third tergite (notal organ).

The mountain scorpion fly ( Panorpa alpina ) only has small punctiform drawing elements on the wings. The Subcosta already merges with the Costa in the middle of the wing . Despite its name, its range is not limited to the Alps.

Panorpa cognata has a light brown-yellowish head. In the males, the sixth abdomen segment at the rear end has an upwardly protruding hump when viewed from the side.