Glaumbær [ 'klœympair ] is a town and an old church village in the Icelandic municipality of Skagafjörður .

Glaumbær is about 20 km from the fjord of the same name inland north of Varmahlíð . The founding of the Glaumbær homestead probably goes back to the Icelandic explorer couple Thorfinn Karlsefni and Guðríður Þorbjarnardóttir , who settled here in the 11th century after trying to colonize the Newfoundland " Vinland ". According to the Grænlendinga saga , the builder of the church is their son, Snorri Þorfinnsson , who was three years old when the family arrived. Coming back from Rome after a pilgrimage, Guðríður spent the end of her life as a hermit here.

This merchant family must have been very wealthy due to the Greenland trade ( walrus ivory etc.). Snorri became the father of the daughter Hallfrid, mother of the future bishop Þorlákur Runólfsson . His son Thorgeir also became the grandfather of an Icelandic bishop, which indicates that the family was very influential at the time, both religiously and politically. 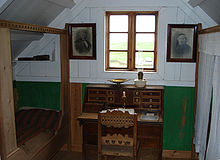 Inside the museum courtyard

The oldest surviving parts of the peat courtyard are from the early 19th century. With its 6 white gables and 13 rooms, it is quite a large courtyard. Like most parishes and parishes, it was very rich. Icelandic celebrities from the 19th century stayed here, such as the romantic and Heine fan Jónas Hallgrímsson, who was born on Tröllaskagi .

Some of the rooms, such as B. workshops can only be reached from the outside. Most of the others are connected by a corridor. The museum part also includes a two-story house, which was built around 1870, in which there are three fully furnished rooms from this period and a café. Old household items are also on display in two other rooms.

The museum courtyard can be reached via Sauðárkróksbraut (No. 75) between Sauðárkrókur in the north and Varmahlíð in the south on Hringvegur (ring road). To the south of Varmahlíð there is one of the last turf churches in the country in Víðimýri .