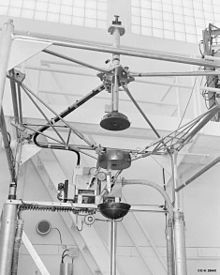 Godiva generated bursts of gamma and neutron radiation by uniting the three parts of the sphere and dropping a rod through a hole in the sphere. The picture shows the reactor in a secured configuration.

The Godiva apparatus ( English Godiva device, also: Lady Godiva or Godiva reactor ) was an unshielded, pulsed research reactor that was in operation in the Los Alamos National Laboratory (LANL) in New Mexico from April 1952 to February 1957. It was used in Technical Department 18 (TA-18) and used to generate controlled gamma and neutron radiation pulses. Test objects were irradiated for the purpose of examining the materials under radiation exposure.

The name Godiva comes from the physicist Otto Frisch . He called the reactor based on the English legend of Lady Godiva , "... because it was naked and unprotected ..." .

The reactor core was a ball of metallic, highly enriched uranium about 30 cm in diameter. The sphere was divided into three parts and was at the top of a two-meter high metal frame. To generate a radiation pulse, first the three parts of the sphere were combined and then a cylinder, also made of highly enriched uranium, was dropped through a borehole that led through the center of the sphere. Sphere and cylinder were together for a short time, a critical mass , so that a fission - chain reaction started, which quickly went out.

The reactor design was chosen based on a previous system called Jemina. Jemina remotely placed several slices of enriched uranium on top of each other to reach a critical mass. On April 18, 1952, too much fissile material was put together due to a miscalculation, which promptly led to a supercritical state and a reactor shutdown . The quick shutdown technology has been improved at Godiva.

Otto Frisch himself received a larger dose of ionizing radiation when he leaned over the device for a few seconds during maintenance work in 1954. He noticed that the control lights on the neutron detector were lit continuously. Frisch's body reflected a sufficiently large amount of neutrons back onto the reactor, bringing it to a critical state. Frisch immediately leaned back and removed some of the uranium. He had no complaints, but said: "A few seconds longer and the dose would probably have been fatal."

Godiva after the criticality accident of February 3, 1954.

Accidents with prompt criticality occurred on February 3, 1954 and February 12, 1957 , and fortunately no one was injured. The reactor was irreparably damaged after the second accident and was taken out of service. Godiva II was built as a replacement . This reactor is still in operation today.