The title of this article is ambiguous. Further meanings are listed under Lady Godiva (disambiguation) . 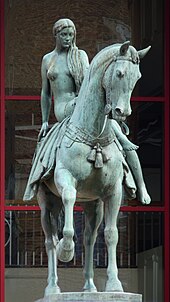 In 1043, Leofric , Earl of Mercia and his wife Godiva founded a Benedictine abbey in Coventry and furnished it with rich property.

Godiva is the subject of a legend that has been documented since the 13th century: the people suffered from the tax burden for which their husband was responsible. Lady Godiva could not bear to see people suffer. She tried to persuade her husband to lower the tax burden. He replied that he wouldn't cut taxes until she rode through town naked. Because Leofric didn't expect his wife to dare to do this. But then she rode through the city, covered only by her uncut hair, worn openly. Leofric, impressed by his wife's courage, then waived all taxes, except those on horses.

Since 1678 the ride of Lady Godiva in Coventry was celebrated by a procession. In the 17th century, the story was further embellished: Only one citizen ( Peeping Tom ) dared to watch - and was then blind.

Alfred Tennyson wrote a poem about the ride of Godiva in 1842. There are also several paintings with this motif, u. a. by the English pre-Raphaelite John Collier (1898) and by Salvador Dalí (1971). Vítězslav Novák made it the subject of a quarter-hour symphonic poem. The character is also featured in the songs Lady Godiva by Alex Day , Don't Stop Me Now by Queen , Modern Love by Peter Gabriel , Lady Godiva's Operation by The Velvet Underground , Lady Godiva And Me by Grant Lee Buffalo , Lady Godiva's Room by Simply Red and My Secret Europe referenced by Phantom / Ghost . The British pop duo Peter & Gordon and the band Dr. Hook & the Medicine Show dedicated an entire song to her. In 2009 the Croatian musician Arsen Dedić released a song of the same name, which was interpreted by the Macedonian pop singer Karolina Gočeva . The opera Isabeau of Pietro Mascagni from 1911 is partly based on the story of Lady Godiva. Furthermore, the German music group Lady Godiva named itself after the historical person. The German metalcore band Heaven Shall Burn uses the painting by John Collier as the cover for their 2013 album Veto and uses the legend to create the opening number Godiva . As the figurehead at a protest rally, Gina Lollobrigida rides through Soho on a horse in the film Stranger Bettgesellen as Lady Godiva in a skin-colored suit . In 2018, the City of Coventry adopted Lady Godiva in its flag.

During the Manhattan project to build the first atomic bomb , there were attempts to determine the critical mass of the uranium bomb. Otto Frisch gave an experimental setup the name Lady Godiva .