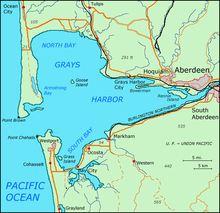 Grays Harbor is an estuary on the Pacific coast of the US state Washington , about 70 km north of the mouth of the Columbia River . The water is about 25 km long and 17 km wide. At the eastern end, the Chehalis River flows into the city of Aberdeen . Aberdeen is on the north bank and the smaller town of Hoquiam is immediately to the west. Apart from the Chehalis River, a number of other watercourses flow into the estuary, of which the Humptulips River is the most important.

Grays Harbor was named by Captain George Vancouver after Robert Gray , who discovered this natural harbor on May 7, 1792 and sailed it with his ship. Gray originally called the bay Bullfinch Harbor, the reports of George Vancouver's research voyages in the region - both captains had met only a few days earlier at sea - were published extensively in contrast to Gray's voyages, and so the name Gray's Harbor caught on. (A few days later, on May 11, 1792, Gray discovered a navigable canal into the Columbia River estuary, and Gray was the first white man to enter it.)