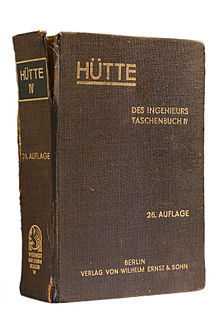 Das Hütte - Des Ingenieurs Taschenbuch (today Hütte - Das Ingenieurwissen ) is a reference work for engineers in various directions. It was compiled for the first time in 1857 by the Hut Academic Association , from which the Association of German Engineers (VDI) emerged . The various authors were members of the association. The technical illustrations were created by Otto Ebel using woodcut technology. It is still being published in constantly revised editions and is therefore the oldest engineering reference work still available today .

The book was initially divided into three sections: Mathematics and Mechanics , Mechanical Engineering and Technology, and Building Science and was originally published by Ernst & Korn (Gropius'sche Buch- und Kunsthandlung), Berlin , later Ernst and Son , where it was published until 1971 .

For the 150th anniversary in 2007, the first edition was reissued as a bibliophile reprint.

Starting with the first edition in 1857, further book series have been developed over the decades. The reference work quickly developed into a standard work for engineers and was often reprinted and translated into other languages ​​due to the great demand. In 1890 the work was divided into two, in 1908 into three and finally into four volumes in 1922. With the 27th edition in 1949, volume four was no longer available.

In the first few years after the Second World War , the plant was temporarily relocated to both the Federal Republic of Germany and the GDR .

The scientific Springer-Verlag has been publishing the paperback since June 16, 1971 and is still the publisher of all hut manuals. At the same time, the series was now called Hut - Pocket Books of Technology . From the 29th edition in 1989 (volume editor Horst Czichos ), which was completely revised, the work appeared again in one volume under the title Hut - The Basics of Engineering . With the 32nd edition, it was renamed again to the current name Hut - Das Ingenieurwissen.

For the 150th anniversary in 2007, the book was published in its 33rd edition. It is based on the current state of science and technology and on the curricula of technical universities and technical colleges and comprises the following sections:

A math and statistics
B physics
C chemistry