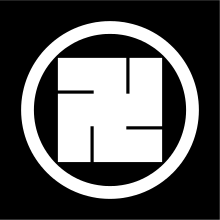 Coat of arms of the Hachisuka ( Hachisuka manji ).

The Hachisuka ( Japanese 蜂 須 賀 氏 , Hachisuka-shi ) were a family of the Japanese sword nobility ( Buke ), which was derived from the Seiwa Genji via Shiba Takatsune († 1367). With an income of 258,000 Koku at times , the Hachisuka residing in Tokushima ( Tokushima Prefecture ) belonged to the great Tozama daimyo of the Edo period .

The Hachisuka ruled Tokushima with the honorary title Awa no kami until the Meiji Restoration . The last daimyo was