Hauppauge [ ˈhɔːpɒɡ ] is one of the largest TV card manufacturers in the world and is based in New York , USA . The company is named after the village of Hauppauge on Long Iceland named, where it is headquartered. The name Hauppauge means "flooded land" in the indigenous Algonquin language .

Hauppauge Computer Works has been the world's leading manufacturer and supplier of analog and digital TV and video products for years. The product range includes PC, Android and Mac solutions and is divided into three main areas: internal and external TV cards (analog and digital, hybrid or dual tuners), video digitization and high-definition recordings in H.264 and home automation since 2015.

The company, founded in 1984, is represented in Europe by several branches, with the European headquarters in Mönchengladbach . She is responsible for sales and marketing, technical support and RMA administration for Germany, Austria and Switzerland and works with European distributors . 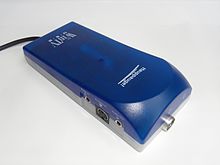 The company is known for its own development and production of its TV cards, but developed its first digital products in collaboration with the TechnoTrend company, purchased them as an OEM and sold them under its own name until Hauppauge decided in 2005 to also use digital Developing and selling products in-house, and ended the business relationship with TechnoTrend the following year.

On October 27, 2008, Avid Technology announced that the Pinnacle PCTV product line had been sold to Hauppauge. In 2009 this company was re-established under the umbrella of Hauppauge Digital as PCTV Systems with headquarters in Luxembourg and a branch in Braunschweig , where the company was founded in 1982 as miro Computer Products AG .

On September 10, 2019, insolvency proceedings due to insolvency and over-indebtedness were opened against Hauppauge Computer Works GmbH.