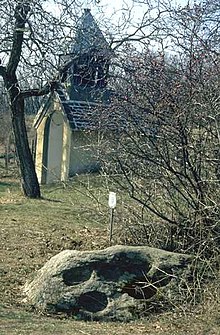 The “ Holy Stone ” in Mitterretzbach is a shell stone that probably served as a place of worship in prehistoric times. A spring and a church in the immediate vicinity later served as Christian pilgrimage sites.

The holy stone is located on the hill of Manhartsberg on the border of Weinviertel and Waldviertel between the road leading from Mitterretzbach to Niederfladnitz and the state border with the Czech Republic near Hnanice, which is only 275 meters away . The monument can also be reached from Hnanice via a path; a separate border crossing for pedestrians and cyclists was opened here in 2006, which was operated until the Schengen expansion at the end of 2007.

According to the report of a local chronicle, Veit Priesler, who could only move around with the help of sticks, was cured of his illness in 1647 after he had washed himself with the water of the spring near the Holy Stone. He then had a well built and the water helped many sick to their health. According to reports , a hermit living near the Holy Stone is said to have brought the spring water called “Marienwasser” to Znojmo and Roseldorf (municipality of Sitzendorf) (30 kilometers away).

If the information in the Lilienfeld monastery chronicle is correct, it will soon be thousands of people who made a pilgrimage to the new pilgrimage site “Our Lady of the Stone” and sought consolation and healing from their ailments there. In 1650 the “Maria am Stein” chapel was built in the vineyards above the spring.

In 1709 the stone was supposed to be destroyed because of "superstitious use". The Lilienfeld abbot Sigismund Braun advocated its preservation.

Reports of the healing of the sick made the number of pilgrims rise more and more, so that in 1750 the construction of a large pilgrimage church began. The water from the spring was led into the church so that the pilgrims could take it there.

The exposed foundations of the pilgrimage church, in the foreground the "Holy Stone"

In 1784, Emperor Joseph II issued the order to have the church "Our Lady of the Stone" removed. According to the chronicle, the church was closed on May 1st, 1785 and the demolition of the structure began.

The 88 centimeter statue of grace was placed in the church of Mitterretzbach, the other valuables in surrounding churches. In addition, some truckloads full of crutches and other walking aids are said to have been removed.

In 1995 the foundations of the demolished church were excavated. In order to get a better overview of this excavation, an elliptical observation tower was built around the foundation walls of the former church in 1999, which also enables a wide view of the Weinviertel and South Moravia .