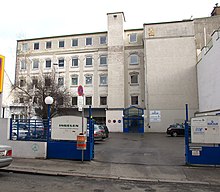 Building of the former Ingelen. Used in 2014 as Ingelen Business Park Hernals

Ingelen , Elektrotechnische Fabrik Ing. Ludwig Neumann  GmbH, was an Austrian manufacturer of electrotechnical devices, in particular a manufacturer of radio receivers such as portable radios . The Ingelen brand consists of the title and the spoken initials of the founder, Ing.Ludwig Neumann.

Ingelen Comedia Electronic from the 1970s

The company was founded in 1907 in the 1st district of Vienna on Schottenring . In the same year, the company moved to Bergsteiggasse 36–38 in the 17th district , which remained the company's location until it was closed. In 1921, Neumann founded Ingelen-Frauenthal-Elektroporzellan in Frauenthal in Styria, the first Austrian porcelain factory (today IBIDEN Porzellanfabrik Frauenthal  GmbH and PPC Insulators Austria  GmbH, part of the SEVES Group) as a subsidiary . In 1924 the first radio components and detector receivers were mass-produced. By 1928 the company had a market share of 80 percent in the portable radio sector.

During the Second World War Ingelen produced in Lower Austria and Tyrol , the Vienna factory was damaged by bombs during the war. Well-known radio models at the time included the Ingelen Geographic with the world-wide patented Geographic scale (the setting frequencies entered in a circle around a small map).

Ingelen also entered into collaborations with other companies, for example the Geographic was manufactured and sold under license as a stand model by Capello in Poland in the following years . Ingelen radios were also sold in Argentina , with Lumex SA Buenos Aires being the importer. The radio factory was later incorporated into the subsidiary Porzellanfabrik Frauenthal, Figer & Co. Vienna.

In 1966 Figer & Co. sold the Ingelen radio factory to the ITT subsidiary Standard Elektrik Lorenz , and the Ingelen name was continued as a brand. At that time Graetz also belonged to ITT and so devices developed under the Graetz brand in Pforzheim were sold in Austria under the Ingelen name. In 1987 Nokia took over Standard Elektrik Lorenz and shortly thereafter stopped using the name Ingelen. As of 2017, the Ingelen Business Park Hernals is located at the former company location , which is used by a supermarket chain and various companies such as Dor Film .

In the middle of 1997, the multimedia sales company HB-Austria acquired the rights to the Ingelen brand and sold seven different types of television under the name HB-Ingelen . In 2015 HB Austria went bankrupt.