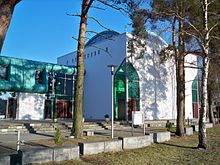 The Al Salam Mosque of the Islamic Cultural Center, view from the west

The Islamic Cultural Center Wolfsburg with the Al-Salam Mosque (for example: "Peace Mosque ") is a center of Islam in the Lower Saxony city ​​of Wolfsburg .

The building is located in a green area not far from the city center. To the west is the Hasselbachtal recreational area , to the east is the Steimker Berg district . It can be reached from the Berliner Ring, a bypass of the city center. 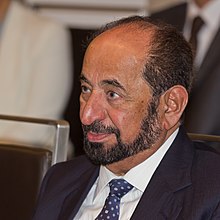 In 1978 the Islamic Association of Wolfsburg was founded, which was primarily intended to represent the numerous Tunisians in the city. The Friday prayer could thus be held regularly, but there was no separate mosque. Plans to relocate the mosque in the Laagberg or Köhlerberg districts failed due to resistance from local residents. In 2004 the association leased a 3,000 square meter plot of land near Berliner Ring, which is not near any residential areas. Construction began in the same year. The main sponsor was the Emir of Sharjah , Sultan bin Mohamed al-Qasimi , the design comes from the Wolfsburg architecture firm Koller-Heitmann-Schütz (khs). In June 2006 the house was inaugurated in the presence of al-Qasimi and the Lord Mayor of Wolfsburg, Rolf Schnellecke .

From the outside, the Islamic Cultural Center Wolfsburg is characterized by a contrasting green and white color scheme and the lack of a minaret . The green color is created by patinated copper .

The centerpiece of the Islamic Cultural Center is the Al-Salam Mosque, the square floor plan of which is 16 meters long. Above this, the mosque rises almost in the shape of a cube and is covered by a dome, which is crowned by a crescent moon symbol. The prayer room is painted white and covered with green and white carpeting. Daylight enters the mosque through large, green-tinted corner windows and skylights . The ground floor is reserved for men, there is a gallery for women . In the mid to Mecca -facing side of the Mosque, Qibla , there is a mihrab with border decoration; A Koran claim hangs on the wall above the prayer niche. The upper part of the mihrāb is golden on the outside. A wooden, three-tier minbar stands to the right of the niche, with a clock hanging on the wall in between.

The rooms of the cultural center, whose upper floor is clad with copper, adjoin the city. There is a meeting room, a computer room, a sales point, as well as a café and restaurant, as well as apartments for imams and caretakers. Around 1500 Muslims from the Wolfsburg area use the mosque.

The Friday prayer with a sermon is held in German and Arabic . Islamic festivals are celebrated in the cultural center. There are also Koran classes and classes in Arabic and religion on weekends.

Dialogues and guided tours are offered for non-Muslims.

The Turkish-Islamic Union of the Institute for Religion maintains the Eyüp Sultan Mosque in Wolfsburg in the north of the city center, but it is not an independent building.