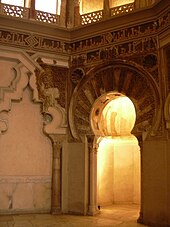 Mihrāb in the Mezquita-Catedral de Córdoba

Mihrāb in the Colorful Mosque in Tetovo

The etymology of the term has not been conclusively clarified. The root حربhas the meaning "fight" in tribe III and "wage war" in tribe IV. As nouns are derived from itحرب "War" and حربة "Lance". محرابis interpreted by some scientists ( Lane , Goldziher ) as a “battleground”, in the sense of ğihād an-nafs (i.e. fight against one's own instinctual soul , inadequacy). Some also suspect a loan word from Old Ethiopian ( Dillmann ) or Hebrew חרבה churba (Beer, Daiches) with a diffuse reference to buildings.

Use of the word in Arabic

In pre- or early Islamic times the word was interpreted in different directions, for example as a palace , as in the following quotations from the Koran:

“Didn't you hear the story of those who quarreled? (Back then) when they (over the wall) got into the palace ! "

"They did what he wanted for him: palaces, sculptures, bowls [...]"

In addition, one finds the meanings niche , recess, balcony , gallery , important part or special place in a palace or a chamber, highest, first or most important place, space between two pillars and burial place . Today the word almost exclusively describes the prayer niche in the mosque, rarely also " sanctuary ".

A mihrāb consists of an arch or vault supported by two or more pillars. The space between the pillars is flat or set back, creating the impression of a door or a passage. Many mihrab niches are integrated into the wall and do not appear on the outside.

Origin and function of the niche in the Levant

Mural of a semicircular niche in the synagogue of Dura Europos , the shape and centrality of which could have been a model for the introduction of the mihrab.

In Roman- Hellenistic times, niches were built as a prominent place for the ruler , as architectural decoration or as a frame for statues, for example for the statue of gods in the temple ( aedicula ).

Orientation in prayer is essentially a Jewish idea. For this purpose, Judaism, strongly influenced by Hellenism, used sacred niches. The Aron Hakodesh , the Torah - Shrine , this may be the best example; it can be found in every synagogue. It serves both to protect and highlight the scriptures. It did not find its positioning in the direction of Jerusalem until the 3rd century, at least there is no older archaeological evidence for this function. The oldest find of such a “trend-setting” niche is the synagogue of Dura Europos in what is now eastern Syria on the banks of the Euphrates from the 3rd century. Despite this age, this niche illustration could have been known to contemporaries during the emergence of the Islamic canon of forms in the 8th century. To a much greater extent, niches were to be found in Christian churches: as the apse housing the altar (or the "choir") in which the priest stays during the sacred parts of the service .

So niches were taken up by the emerging Islamic architectural style. For example, niches can be found in almost all secular buildings from the early days of Islam, although some, like the one in Qusair 'Amra in today's Jordan, also show depictions of rulers enthroned in niches. From this it can be concluded that the early Umayyad sultans were enthroned in their desert castles in prominent niches or apses in the audience halls.

The mihrāb in the mosque

Mihrāb in the mosque of Qus, Upper Egypt

The mihrāb is the place of the Imam during daily prayers and Friday prayers . He uses various elements to indicate the direction of prayer, the qibla . This can be a block of stone like in the house of Mohammed in Medina , or a colored line or a stone slab with signs, like in the mosque of 'Amr in Fustat . Sometimes a lance stuck in the ground was used; so in the "field mosques" of Kufa and Basra .

In the grotto under the Dome of the Rock in Jerusalem there is a 1.3 x 0.8 m flat mihrāb made of marble , which is often presented as the oldest preserved mihrāb .