Dinar of al-Walid I in the Numismatic Museum of Athens

al-Walid ibn Abd al-Malik succeeded his father Abd al-Malik (685-705) on October 8, 705 . During his reign, the rule of the Umayyads was further consolidated, relying on the proven governors of his father (including al-Hajjaj ).

The caliphate reached its greatest extent under al-Walid . Thus, in the west, the direction of the Maghreb was completed and the conquest of the Visigothic empire was initiated under Tariq ibn Ziyad in 711 . In the east of the empire Sindh and the Indus valley were subjugated under Muhammad ibn al-Qasim (711) and Transoxania under Qutaiba ibn Muslim (since 712). In addition to securing the Caucasus regions against the incursions of the Khazars (711–713), successes against Byzantium were also achieved. The campaign against Constantinople prepared by al-Walid was only carried out under his successor Sulayman (715-717). 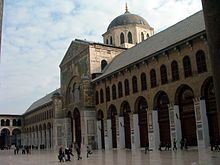 al-Walid I is mentioned in the national anthem of Syria .

Caliph of the Umayyad