Umayyad Mosque in Damascus, south side of the courtyard

Umayyad Mosque in Damascus, west side of the courtyard 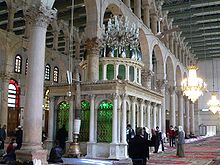 Shrine of John the Baptist

The Umayyad Mosque , also known as the Umayyad Mosque ( Arabic جامع بني أمية الكبير Jāmiʿ banī Umayya al-kabīr ), is a mosque in the Syrian capital Damascus . It is one of the oldest mosques in the world and a model for other mosques in the architectural style of an ancient basilica (the later pillared hallmosque). In pre-Islamic times it was built as anearly Byzantine cathedral (St. John's basilica )consecrated to John the Baptist .

In the late 4th century AD , a Roman temple dedicated to the god Jupiter , where a Hadad temple had already stood several centuries earlier , was replaced by a Christian basilica. According to tradition, the head of John the Baptist was kept in the basilica. After surrendering to the Muslims during the Arab conquest of Damascus in 636, the building served both Christians and Muslims as a religious place of worship for about 70 years.

Under the Umayyad - Caliph al-Walid the basilica between the years 708 and 715 in the present mosque was converted. The entire outer walls, however, come from the basilica and were not built by the Arabs. Especially on the outside of the south wall, besides Greek ornaments, there are also Greek inscriptions and an ancient relief with a scratched-out face at a height of a few meters. Several columns of the larger ancient sanctuary outside the mosque have also been preserved, the most impressive of which are on the west side.

On May 6, 2001, Pope John Paul II prayed at the shrine of John the Baptist in the Umayyad Mosque. It was the Pope's first visit to a mosque. This visit is still a central element of the relationship between Islam and the Catholic Church. Until Pope Benedict XVI visited the Sultan Ahmed Mosque in Istanbul . in 2006 it was the only papal visit to a mosque.

The mosque measures 157 × 97 meters, belongs to the basilica type and is strongly reminiscent of a Christian church. It has four gates and three later built minarets in different architectural styles. The east minaret is called "Jesus minaret". Many Muslims believe that this is the place where Jesus will appear at the end of the world to fight the Antichrist .

The mosque encloses a large inner courtyard with three small outbuildings, the treasure house ( Qubbat al-Chazna ), the clock house and a well house. According to Arab sources, the treasury was kept in the treasury - al-Walid did not consider a suitable place for it. However, it is possible that only donations from the Islamic community were kept in the treasury. In the spacious, 140 m long prayer hall, with the 45 m high Al-Nissr dome (eagle), there is a shrine that Christians and Muslims alike revere and which is said to contain the head of John the Baptist .

The mosque is decorated with colored mosaics made by Byzantine builders. The mosaics in the arcades , which represent paradise , are particularly magnificent - with a golden sky and 22 different shades of green for the leaves of the trees. The oasis of Damascus represented the outer, worldly paradise. The forecourt of the Umayyad Mosque, on the other hand, should represent the forecourt to Paradise. The Umayyad caliphs presented themselves as religious leaders - and at the same time referred to the political claim to rule over the believers as God's administrator.

In addition to the large prayer hall, there are four larger halls. In one of them there is a shrine that is said to contain the head of al-Hussain , Muhammad's grandson . The shrine is an important pilgrimage destination for Shiites .

Immediately on the northwest corner of the mosque is the mausoleum of Sultan Saladin .

The Umayyad Mosque of Aleppo was probably also built under al-Walid a little later , but nothing of its original shape has survived today. Another mosque of this type is located in Almonaster la Real in Spain .