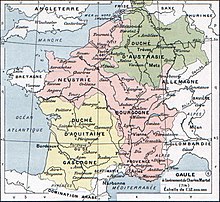 The Franconian Empire at the death of Pippin the Middle (714)

In Neustria , after the death of the Carolingian housekeeper Pippin , the 6-year-old Theudoald , the son of Grimoald the Younger and grandson of the Plektrudis and Pippins, was chosen to be the housekeeper, but Raganfrid prevailed against him in the Battle of Compiègne on September 26th . At the same time, Plektrudis has Karl Martell , the illegitimate son of Pippin and Chalpaida, imprisoned in Cologne .

The internal disputes in the Franconian Empire for power take not only the Frisians but also Eudo of Aquitaine and Antenor in Provence as an opportunity to free themselves from central Franconian power. Bishop Savaric of Auxerre also fought for his own position of power by subjugating Orléans , Nevers , Avallon and Tonnerre .

The Saxons use the inner Franconian turmoil and devastate - probably in league with the Frisian Duke Radbod - the Franconian border district Hatteri (Hatuaria) in what was later to be Lower Lorraine.

Dagobert III. , Frankish king since 711 , dies in late 715 or early 716 at the age of only 16. Plectrudis and Raganfrid override the claims to the throne of Dagobert's son Theuderic IV , since he is still a small child, and instead place Chilperic II , the son of the former King Childeric II , on the throne.