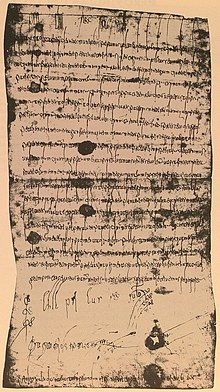 Document by Chilperic II of February 28, 717 for the Abbey of Saint-Denis. Paris, Archives nationales, K 4, No. 3

The young Chilperich was banished to a monastery after the murder of his parents, where he lived for 40 years as "Brother Daniel". In 716 he was succeeded by the opponents of Karl Martell , the caretaker Raganfrid and Plectrudis of Australia , as the successor to Dagobert III. Raised King of Neustria , the heart of the Franconian Empire . The Palatinate Compiègne was his residence.

Famous is the statement in later sources that he was mostly carried by Raganfrid on a ceremonial ox cart on his trains. In fact, however, it was only brought to the annual March field in a traditional wagon . According to historians such as Sebastian Scholz and Ian Wood , the king even fought personally in battle and was not just a puppet of his house-maker: Overall, recent research is more skeptical about the claim of the sources written by the victorious Carolingians that the last Merovingians were all but pitiful shadow kings. The anonymous author of a contemporary chronicle that was written in Jarrow , England , describes Chilperich in 717 as a powerful ruler ( Historia Abbatum auctore anonymo 32).

Chilperich's and Raganfrid's alliances with the Frisian Duke Radbod (717) and Eudo of Aquitaine (718) against the strong opposition of the Carolingians , especially against Karl Martell, failed. Karl defeated the Neustrians at Amel (French Amblève ), Vinchy (March 21, 717) and Soissons (719). When Chlothar IV, supported by Karl Martell, died in 719, Karl had Chilperic II extradited by Eudo and recognized him as king with the restoration of his influence in Neustria. It was only from this point in time that Chilperich was actually disempowered.

Chilperich II died in 721 and was buried in Noyon. Karl Martell appointed Theuderich IV as his successor. It is unclear whether the last Merovingian king Childerich III. Was Chilperich's son.

His name is also unclear. It is conceivable that he was baptized as Daniel and later took Chilperic as his coronation name to emphasize his dynastic legitimacy and to express willingness to fight and independence, or that he was born as Chilperich and was named Daniel when he entered the monastery.