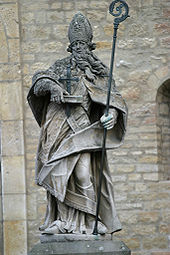 Monument of St. Boniface in front of the Mainz Cathedral

The Anglo-Saxon missionary Wynfreth makes his first missionary trip to the Frisians . The missionary work fails because of the Frisian Duke Radbod , a pagan and opponent of the Franks, who has just recaptured southwestern Friesland from them. Wynfreth, who later became known as Bonifatius, returned to Nursling in the autumn .