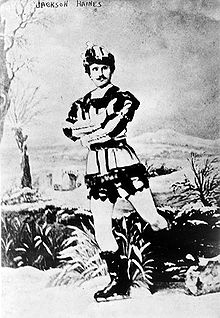 Jackson Haines won the first US championship in 1864 with a new type of ice skating and new steel skates. He was criticized for this, however, and accused of concentrating more on body and limb poses than on the figure run. The stiff and strict English style of ice-skating still prevailed.

So he went to Europe and did a lot of shows. The first success came in Stockholm . His appearance inspired the Swedish King Charles XV. so much so that in 1866 he decided to found a royal ice skating club .

Jackson Haines appearance was thus the impetus to found the Vienna School of Figure Skating, which soon compensated for the previous lead of the English.

His athletic achievements seemed so astonishing that those who did not see them with their own eyes would not believe it; they questioned the implementation of the figures described. Depping, author of the work “The Magic of Strength and Ability” (1869) wrote in his book that it is not possible to change direction without a new push. He rejected the testimony of the eyewitnesses by saying that they fell victim to an optical illusion.

It is often falsely claimed that Haines died of pneumonia that he contracted on a sleigh ride from Saint Petersburg to Stockholm. In fact, he died impoverished of tuberculosis in Kokkola (Gamlakarleby), Finland, which was then a small village.