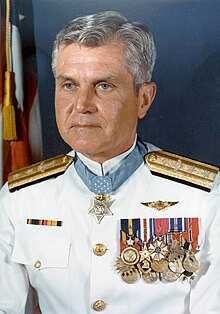 James Bond Stockdale (born December 23, 1923 in Abingdon , Knox County , Illinois , † July 5, 2005 in Coronado , California ) was one of the most decorated officers in the history of the United States Navy .

Stockdale successfully graduated from the Naval Academy in 1947 . At the time of the Tonkin incident in August 1964, Stockdale was commanding a United States Navy fighter squadron. During the Vietnam War he was the highest-ranking naval officer from September 9, 1965 to February 12, 1973 in captivity in the prisoner of war camp " Hanoi Hilton ". He wore 26 personal war awards, a. a. the Medal of Honor and four Silver Stars .

Vice Admiral Stockdale was a candidate for Vice President in 1992 alongside independent candidate Ross Perot . Together they achieved a share of the vote of 18.86 percent. Stockdale died in 2005 and was buried in the Annapolis Memorial Cemetery , Maryland .

In 2006, the US Navy announced a destroyer of the Arleigh Burke-class destroyer to want to name it after Stockdale. The USS Stockdale (DDG-106) entered service on April 18, 2009.

The management expert Jim Collins developed a leadership or motivational theory, which he called the Stockdale paradox , following Stockdale's experiences during his captivity : According to this, it is necessary, on the one hand, to face the brutal and often devastating reality and not to look at a false one Indulge in illusions. At the same time, one shouldn't lose faith in the ultimate success. This attitude alone could prevent slipping into fatalism on the one hand or naive optimism on the other.