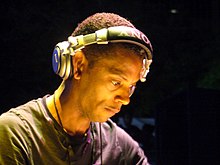 Jeff Mills (* 18th June 1963 in Detroit , Michigan ) is an American techno - DJ and musician . He is considered one of the most important representatives of Detroit techno .

In 1987 Jeff Mills started as a hip-hop DJ under the name "The Wizard" on his weekly radio show on the Detroit broadcaster WJBL. From 1988 he produced together with Anthony Srock industrial music under the name Final Cut . A little later he founded the music label Underground Resistance , together with Robert Hood and Mike Banks , whose publications defined and significantly shaped Detroit techno. Since 1989 Mills has also produced his first records solo.

After an argument with Mike Banks, Mills moved to New York in 1991 and founded his own label, Axis Records. He also produced for the Berlin label Tresor Records and at that time found a home in Berlin. In 1992, Axis opened a branch in Detroit, but it was closed again that same year. A year later Mills left New York and moved his label to Chicago . In 1995 Mills introduced his new sub-label Purpose Maker . In December 2001, another sub-label was launched with Axis 9.

In 2000, the American released a techno version of the soundtrack of Fritz Lang's film Metropolis from 1926 on Tresor Records. The “gaunt man”, as the specialist press often calls him, discovered his love of film dubbing. Some critics accuse Mills of having dismembered the film too much. This work is highly praised by others. 2005 set to music it " The Three Ages " by Buster Keaton , originally built in 1923 On July 2, 2005 Mills has performed with the Orchestra of Montpellier at the Pont du Gard on the occasion of the 10th anniversary of the establishment of the structure for UNESCO - World Heritage Site . For the first time since the Underground Resistance era, the DJ gave a live act. Mills acted in the midst of a top-class classical orchestra mainly with his Roland TR 909 . Many of his classics such as "The Bells" as well as the original songs "Amazon" and "Sonic Destroyer" have been reinterpreted. The DVD of the recording was released by Tresor in 2006 under the name Blue Potential .

His releases on the Axis label are a mixture of the slightly gloomy atmosphere of Detroit techno and a turn to futuristic, experimental structures. Their typical sound set them apart from other publications for a long time and gave them a high recognition value. Releases on the Purpose Maker label are more oriented towards techno clubs and are functional and therefore very popular with techno DJs. The track “The Bells”, which appeared on the “Kat Moda EP” (catalog number PM-002), is one of his greatest hits.

As a DJ, Jeff Mills is known for his fast, spontaneous mixing style. He often changes the records every minute and simply throws the used discs behind him. "X-103 - Atlantis" was added to The Wire's "100 Records That Set The World On Fire (While No One Was Listening)" list.