Show someone a bird

Showing someone a bird refers to an insulting gesture in German that insinuates that the recipient “has a bird ”, that is, that they are not in their right mind. This is usually done by tapping your forehead or temple with your index finger . In road traffic, this hand signal, also ironically referred to as a " driver salute ", expresses particularly displeasure with the driving style of another road user. In Germany, it can be viewed as an insult under criminal law . 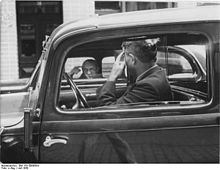 According to the “Dictionary of German Idiomatics” (“Duden - Redewendung”), the gesture probably goes back to the old popular belief that animals - and birds in particular - nestle in a person's brain and can cause mental disorders .

The Viennese medical historian Johann Werfring, on the other hand, explains the origin of “bird pointing” (especially with regard to the linguistic implications) with the former name “bird heads” for microcephalic people (= people with small heads). In the microcephaly is a development feature in humans (mental retardation), wherein the head has (like the brain) has a comparatively small size.

In 1960, the Düsseldorf Higher Regional Court refused to revise the judgment as an insult. This was justified as follows:

"Tapping on the forehead to criticize the traffic behavior of another road user is a testament to personal disregard. The witness saw the defendant's insult by tapping on the forehead and the opinion expressed with it be mentally not normal. [...] It may be that such a gesture does not always have a defamatory character. Among adults, completely strangers to each other, as they face each other in traffic, it is an expression of disregard. "

Tapping on the forehead with both index fingers is referred to as a double bird , but according to the Düsseldorf Higher Regional Court it does not constitute a defamation of honor (Ref .: 5 Ss 383 / 95-21). Another court, however, saw the double bird as an insult.