The Johanneskirche in Nonnenwerthstraße in Cologne-Sülz is the second church of the evangelical parish Cologne-Klettenberg next to the Tersteegenhaus . It was built in the early sixties to keep up with the growth of the community in the Sülz and Klettenberg districts . 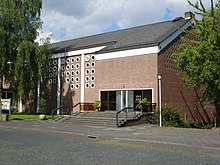 The foundation stone was laid in 1961 and the church was consecrated on July 7, 1963. It is named after the evangelist Johannes because the pastor Schumann, who led the congregation from 1951 to 1972, worked particularly on the interpretation of the Gospel of John and the Revelation of John . 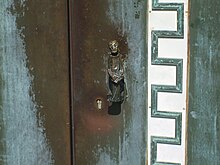 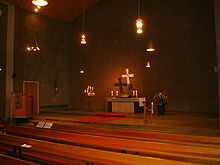 Due to the growth of Cologne and immigration, the number of Protestants in the area of ​​today's Lindenthal district increased from 1871 to the 1960s, which made a separate church necessary for the districts of Sülz and Klettenberg. In 1956 a church building association was founded and the preliminary planning started, the foundation stone was laid in 1961, and on July 7, 1963 the Johanneskirche was consecrated.

An organ building association was founded in 1967 and the organ was completed in 1974.

In addition to normal church services, beat masses , initiated by Pastor Uwe Seidel , as well as concerts, for example in the in-house Johanneskantorei, take place in the Johanneskirche.

In 2008 there were around 9,500 Protestants living in the area of ​​the evangelical parish in Cologne-Klettenberg (Sülz and Klettenberg). Numerous alterations and renovations are planned or in progress at the church.

The building was built according to plans by the architect Peter Graebner. The property is about three meters lower than the adjacent Nonnenwerthstraße, so that the basement is below street level on the entrance side, but above ground on the three other sides. Originally an extension by a 30.50 m high church tower was planned, which was postponed due to limited funds.

The side walls of the church consist of a reinforced concrete frame construction with jointed exposed masonry. Prefabricated hexagonal concrete honeycombs with colored cast glass are inserted into this for exposure. The altar wall consists of two uniform masonry surfaces running towards each other at an obtuse angle. The building has a flat sloping gable roof with slate roofing and cladding with precious wood panels underneath.

Behind the entrance area is a baptistery, which is only separated by glass walls . A gallery with the organ and ancillary rooms is located above the entrance area and baptistery . The sacristy connects to the side of the nave. The church was initially designed for 460 to 520 seats. The nave receives direct light through the colored honeycomb windows in the side walls.

As a reference to the namesake, the door handle at the main entrance is designed in the form of an evangelist John pointing to the Bible. The altar of the Johanneskirche is built in block form from exposed concrete and covered with a natural stone slab. Above it is a floating triumphal cross made of metal with decorations made of lead crystal and amethyst nails . Its inscription reads: I am the bread of life (Joh. 6, 35). The church has a magnificent organ with which concerts are given in addition to accompanying church services.