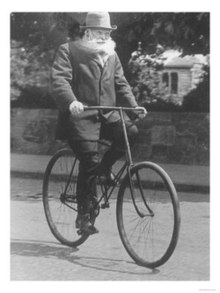 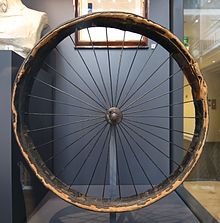 Dunlop's first tire in the National Museum of Scotland

John Boyd Dunlop (born February 5, 1840 in Dreghorn , Scotland , † November 23, 1921 in Dublin , Ireland ) was a British veterinarian . The invention of the air-filled tire is associated with his name .

John Dunlop was born into a farming family. Even as a young man he noticed that it was easier to work the fields with a large roller than with a smaller one, as the larger one was easier to pull over the uneven ground. Since he had health problems as a child, his parents decided to let him study. At the age of 19 he graduated from Royal Dick Veterinary College as a veterinarian . Two years later he opened what was to become the longest-running practice in Ireland in Dublin .

When working in his practice, Dunlop had to deal more often with objects made of rubber and deal with the matter; so he constructed some apparatus for which he used rubber. His notes show that he had thought about the practical uses of rubber for over 20 years.

In 1887, at the age of 47, Dunlop constructed his first air-filled rubber tire, initially wrapped with strips of fabric from his wife's dress. The anecdote is rumored that Dunlop invented the tire so that his eleven-year-old son's tricycle would not make such a noise and that he would also have better chances in races against his friends. He wrapped tubes made of thin rubber sheets around the vehicle's wheels and inflated the covers with a football pump. Dunlop junior's first successful test drive was on January 28, 1888.

On December 7, 1888, Dunlop applied for the patent for the first pneumatic bicycle tire. He had 50 bikes fitted with these tires made by the local bicycle manufacturer W. Edlin & Co. The supposed new invention, however, had already been patented 40 years earlier by his Scottish compatriot Robert William Thomson , but had not been able to establish itself. According to Dunlop, he had no knowledge of this invention. Since Thompson's patent had expired in the meantime, however, it was possible for competitors such as Michelin to take up Dunlop's ideas.

On May 18, 1889, Irish cyclist Willie Hume won the first race with air tires at Queen College Sports in Belfast against national champion Arthur Du Cros . It was on that day that Dunlop met the entrepreneur William Harvey Du Cros (1846–1918), the father of Arthur Du Cros. Hume also took part in races in England with his bike with the new type of tire . It was displayed in the window of a bicycle shop in Liverpool , causing such a crowd that the police were called to clear the sidewalk and street.

Dunlop considered opening a tire production facility near Coventry , the heart of the UK bicycle industry, but was convinced to locate the jobs in Ireland. Pneumatic Tire & Booth's Cycle Agency was founded together with Du Cros senior and other partners . In 1895 Dunlop withdrew from the company. It is said that the polite and well mannered Dunlop could not get used to the robust business methods of Du Cros. He put his rather small profit from the tire business in a Dublin textile factory and continued his veterinary practice without causing a stir.

Since 1871 John Boyd Dunlop was married to Margaret Stevenson, the couple had a daughter in addition to their son John. He died in 1921 and is buried in Deansgrange Cemetery south of Dublin.

Even today the oldest and simplest type of bicycle valve - consisting of only four parts plus a cap - is called the Dunlop valve . The valve stem, a brass tube with a fine 8 mm valve thread on the outside, has two opposing slots on the outer edge and a conical tapering of the lumen on the inside. The valve insert has a matching cone, over which a small piece of latex hose, the valve hose, is pulled. With a union nut to be tightened by hand, the insert is pressed into the shaft at a protruding collar in order to seal it with this rubber. Two lateral webs engage in the mentioned slots and prevent twisting. The insert has an axial longitudinal bore that leads from the outside through the cone and then exits through a lateral bore, also about 2 mm in diameter. Here the valve insert still has a diameter of about 3 mm, here too the valve tube is already clearly stretched and closes the one-sided transverse hole due to the restoring force of its elasticity. If air is now pressed in through the valve insert, the hose rises at the transverse hole and then along a channel that is formed, which runs about 5 mm to the inner end of the valve insert and lets air flow into the hose with a typical hissing noise. After each pump stroke, the hose closes the hole and is additionally supported by the internal pressure of the hose, since the hose, which is stretched along the circumference, also seals with the cylindrical innermost piece of the valve insert with a low leak rate ; for this it is necessary that the hose protrudes slightly over the rounded inner end of the. To release air, the union nut must be loosened in order to ventilate the conical seat. The fact that the valve insert can be removed with five turns of the finger also makes the valve very susceptible to sabotage. The air pressure of the tire can only be measured approximately during an injection, because the pressure drop due to the flow resistance of the air channel between the hose and the insert is also measured.

The valve tube is still made of yellowish, translucent natural latex rubber (NR), but there are seldom red and black rubber variants that are less flexible. All other parts of the valve were originally made of nickel-plated brass. A fine chain connected to an adjacent spoke with a ring held the rotating brass protective cap, which was knurled like the union nut . Around 1960 protective caps made of rubber were common, which could be screwed on or simply put on. Around 1970, protective caps made of black thermoplastic became popular. Today these are made of polyethene (PE), mostly black, but sometimes in company colors - yellow from Continental or blue from Schwalbe.