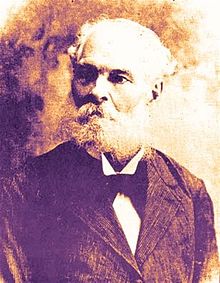 Reyes entered the military in 1855, became a member of the military band led by Juan Bautista Alfonseca , where he learned to play various instruments, including the euphonium, piano and cello. He began composing sacred and secular music at a young age, but most of his works remained unpublished. A Requiem in E flat major was arranged for the organ by Juan Francisco García . In 1882 he composed the melody for Quisqueyanos valientes , a poem by Emilio Prud'Homme , to which César Nicolás Penson , Francesco Henriquez y Carvajal , José Dobeay and JJ Pérez contributed stanzas. The Wwerke was performed in 1883 on the twentieth anniversary of the beginning of the war to regain national statehood and became the national anthem of the Dominican Republic in 1896, but was not officially endorsed by President Rafael Leonidas Trujillo until 1934 . His Pasodoble Salve al Progreso was premiered in 1896 on the occasion of the introduction of electricity supply in the Dominican Republic. In 1932 the piece was orchestrated by José de Jesús Ravelo and performed across the country in 1935 on Reyes' 100th birthday.