The Josephson effect is a physical effect that describes the tunnel current between two superconductors . It was theoretically predicted by Brian D. Josephson in 1962 and later verified in numerous experiments, first in 1962 by John Rowell at Bell Laboratories (partly with Philip Warren Anderson ). Josephson received the Nobel Prize in Physics in 1973 .

The electric current in superconductors is not carried by individual electrons , as is the case in normal conductors , but by electron pairs, the so-called Cooper pairs , as postulated by the BCS theory .

In a superconductor, all Cooper pairs are in the same quantum mechanical state , so they can be described by one and the same wave function (see BCS theory ). In a Josephson junction, the wave functions of the two superconductors are coupled through the thin, non-superconducting layer. The size of the coupling is essentially determined by the thickness of the layer. The supercurrent (current carried by Cooper pairs) through this layer has the size

where represents the phase difference of the superconducting wave functions on both sides of the barrier and is the critical current of the barrier.

the Josephson constant . It is known exactly because e ( elementary charge ) and h ( Planck's quantum of action ) have been used to define the SI units since 2019 and a fixed value has been assigned to them. Since frequencies can be measured very precisely, the Josephson effect is suitable as a voltage standard for the precise representation of the unit volt . For the (very low) voltage of 1 µV, for example, the frequency is 483.5978… MHz.

It remains to be mentioned that the current through a Josephson junction is dependent on external magnetic fields. Strictly speaking, the 1st Josephson equation reads:

Since all these processes take place in parallel, the following applies

DC Josephson Effect: If the voltage is small, i. H. the energy of the Cooper pairs in the electric field over negligible, results in the minimization of the free energy of the system that is in equilibrium with sets. Ie

If no external voltage source is connected, this Josephson current is compensated for by tunneling individual electrons in the opposite direction so that no voltage builds up. If a (low) voltage is applied, the Josephson current flows away due to the electric field through the voltage source, so that essentially applies to the measured current:

AC Josephson effect : If the voltage is so high that the thermal effects are negligible, the Resistively and Capacitively Shunted Junction (RCSJ) model is usually used to set up a DGL for . The total current is used as the sum of the Josephson current, ohmic current, and the current of a capacitor. If a constant voltage is forced by a voltage source, the result is a phase of

so the Josephson current is then an alternating current with a circular frequency . 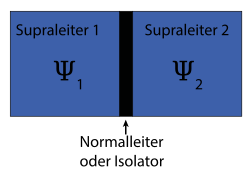 The barrier separating the two superconductors may only be a few nanometers thick so that quantum mechanical tunneling processes can take place. This can be done in different ways:

Josephson junctions are very accurate frequency-to-voltage converters. With the inverse Josephson effect , the Josephson contact is operated with a voltage of the form

One can show that I c is then constant. This arrangement is used in calibration offices as a very precise frequency-to-voltage converter for the calibration of voltages and is then called the Josephson standard or Josephson quantum standard.