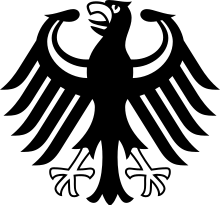 Logo on the decisions of the Constitutional Court

In German jurisprudence, the decision of the Federal Constitutional Court (BVerfG) of May 24, 2005 (Az. 1 BvR 1072/01, BVerfGE 113, 63 ) is called the Junge Freiheit judgment . In the legal dispute between the weekly newspaper Junge Freiheit and the state of North Rhine-Westphalia , the Federal Constitutional Court found that the mention of Junge Freiheit as a right-wing extremist publication in the constitution protection report of the state of North Rhine-Westphalia constitutes an inadmissible restriction on freedom of the press.

The matter was referred back to the Düsseldorf Administrative Court and ended there on June 23, 2006 through a settlement between the parties. “They agreed that there was no need to measure more than ten years old statements by the NRW Constitutional Protection on the JF against the standards currently set by the Federal Constitutional Court.” The lawyer for Junge Freiheit , Alexander von Stahl , welcomed it, “that the authority is now making the comparison expressly confirms that in future it will strictly adhere to the spirit and content ('requirements') of the highest court ruling. "

In the reports on the protection of the constitution, Junge Freiheit was dealt with in detail in the context of reporting on right-wing extremist activities. According to the state's assessment, the articles published in it contained clues for suspicion of anti-constitutional efforts. The Junge Freiheit complained before the Administrative Court of Dusseldorf against the country North Rhine-Westphalia among other things, failure to disseminate the reports of the security, if not the passages about the Junge Freiheit would be removed, for a declaration that the country was not authorized the Junge Freiheit in the category Classify “right-wing extremism” as long as there are only indications of suspicion. The VG Düsseldorf dismissed the action on February 14, 1997 by judgment. The Higher Administrative Court for the State of North Rhine-Westphalia rejected the application for admission of the appeal by decision of May 22, 2001.

The Federal Constitutional Court that was called upon to overturn these decisions and referred the matter back to the Düsseldorf Administrative Court. The "Junge Freiheit Verlag GmbH & Co." was represented for this constitutional complaint by the former Federal Prosecutor General Alexander von Stahl .

Meaning of the judgment

With this judgment, the BVerfG confirmed earlier statements on freedom of the press . The inclusion of a press organ in the "right-wing extremism" section of a report on the protection of the Constitution means a state intervention that requires justification. A suspicion based on individual articles is not sufficient. Individual expressions of opinion, for example in a special section “Market of Opinions”, which are viewed as unconstitutional in themselves, cannot be attributed to the newspaper in all cases. This “market of opinions” does not have to cover the entire political spectrum. The newspaper's responsibility under press law does not automatically lead to the journalistic attribution of the opinions expressed in the newspaper. The mere suspicion of right-wing extremist orientation must not be listed with proven right-wing extremist efforts in the same section of the constitution protection report.

"The publication of the injured boy freedom in their fundamental right to freedom of the press 1 of Art. 5 para. 2 sentence GG. The basic right secures the freedom of the production and distribution of printed matter and thus the communication medium of the press. [...]

The subject of the reports on the protection of the constitution is the reference to the suspicion that Junge Freiheit is endeavoring, with the help of the newspaper, to remove the free democratic basic order in the federal and state levels. The constitution protection reports pick out individual articles from Junge Freiheit as evidence in order to justify an overall judgment of the newspaper and the group behind it on this basis. [...]

The task of the press is to provide comprehensive information, to reflect the diversity of existing opinions and to form and represent opinions itself. This presupposes their independence from the state. The freedom of the press therefore protects the holders of fundamental rights from the state influencing the information disseminated with the help of the press, in particular from negative or positive sanctions linked to the content and design of the press product. [...]

The constitution protection report is not an arbitrary product of state public relations work. It aims to ward off particular dangers (§ 1 VSG NRW ) and comes from a body that specializes in this area and has special powers (see §§ 5 ff. VSG NRW), including the legal power to use intelligence resources . [...]

The protective content of the fundamental rights of communication can have an impact on the requirements for the determination of efforts or a corresponding suspicion as well as on the legal assessment of the measures taken, especially with regard to their appropriateness. [...]

Accordingly, the mere criticism of constitutional values ​​is not sufficient as an occasion to affirm an anti-constitutional endeavor within the meaning of Section 15 (2) in conjunction with Section 3 (3) of the North Rhine-Westphalia Constitutional Protection Act (VSG) or to take the negative sanction of publication in the reports for the protection of the constitution. (...)

When evaluating, however, it must be taken into account that newspapers usually do not adopt all published content as their own, even if they do not expressly distance themselves from them. [...]

The freedom of the press also includes the decision to only want to offer a forum for a certain political spectrum, but to grant the authors a great deal of freedom there and subsequently not to identify with all individual publications. In its own estimation, Junge Freiheit is right-wing conservative, but in the right-wing spectrum it publishes articles from very different authors with different concerns. This includes articles by prominent conservative politicians and writers who are not suspected of anti-constitutional activities. Special clues are needed as to why the editors do not identify with these articles, but rather with the contributions used by the courts, or that they only use this spectrum of opinions to place anti-constitutional contributions in such an environment better convey to the public. [...]

Although the authority only assumed factual indications of a suspicion, it reported the complainant under the headings "right-wing extremism", "right-wing extremist publications, publishers, distributors, media" or "right-wing extremist organizations, groups and currents" without any differentiation in the structure or placed in the headlines of the report on par with groups for which it has identified anti-constitutional tendencies. [...]

It should also be taken into account that the media, when reporting on anti-constitutional efforts, usually do not reproduce the nuances contained in the text, but place all organizations listed in the same category in the report on the protection of the constitution as one. "

After the judgment, the authority initially continued to assume that it was lawful to report on the "Junge Freiheit", as there were indications of suspicion of right-wing extremist activities. One was confident that before the administrative court, to which the dispute was referred back by the BVerfG for a decision, it would be possible to clearly prove that anti-constitutional positions of external authors could be attributed to the "Junge Freiheit". Constitutional protection chief Hartwig Möller said in a first reaction to the judgment:

“We will continue to draw attention to the dangers threatening democracy from intellectual right-wing extremists. [...] The freedom of the press must be protected. The Protection of the Constitution of North Rhine-Westphalia adheres to this principle in its legal mandate to warn of the dangers posed by extremists of all kinds [...] The ' New Right ' blurs the dividing lines between the democratic and right-wing extremist spectrum. […] Her moderate style often conceals anti-democratic and xenophobic concepts. Uncovering this remains one of the most important tasks of our constitution protection. "