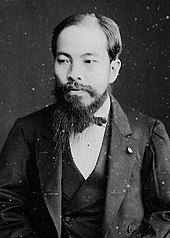 Kōno Togama joined the local association for the restoration of imperial rights in 1881. In 1863 he and others were imprisoned by the Han authorities for opposing the shogunate .

After the Meiji Restoration , Kōno came into the government through the mediation of Etō Shimpei , who worked for the Gyōbushō (刑部 省), the Ministry of Punishment. Etō got him an official position, and he gradually rose to head of justice. - Kōno later sat in court over Etō, who disagreed with the Meiji government and who had organized the Saga uprising in 1874. He later also tried the leaders of the Satsuma uprising of 1878.

In 1881 Kono became Minister of Agriculture and Trade, but was forced to resign due to the political crisis in the same year. Together with Ōkuma Shigenobu and Numa Morikazu he founded the political party Rikken Kaishintō , of which he became vice president. In 1884 he was the main proponent of the dissolution of the party, and left with Ōkuma when he was unsuccessful.

From 1888 to 1892 Kōno was a member of the Secret Council, which had been created by Itō Hirobumi to examine his draft constitution. In 1892 he worked briefly in the 1st Matsukata Cabinet as Minister of the Interior and as Minister of Justice and then Minister of Culture in the subsequent 2nd Itō Cabinet .