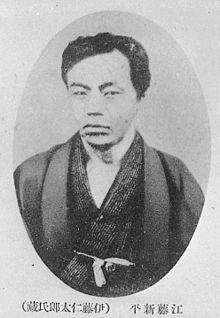 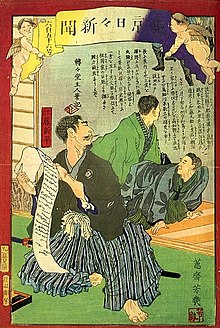 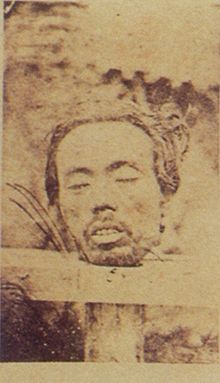 Etō Shimpei (also Etō Shinpei, 江 藤 新 平 , author name Nanpaku / Nampaku ( 南 白 ); born March 18, 1834 in Yae, Hizen province ; † April 13, 1874 in Saga ) was a Japanese samurai and politician who defended himself in the overthrow of the Tokugawa regime and at the beginning of the Meiji period , but was eventually executed as the initiator of an armed uprising ( Saga Rebellion ). Today he is one of the ten most important figures in the Meiji Restoration in Japan .

Etō was born in 1834 as the eldest son of the low-ranking samurai Etō Tsutanemitsu in Yae (now part of the city of Saga) in the fiefdom ( Han ) Saga . Since his early childhood he had close relationships with Sagara Chian, who also grew up in Yae . In 1848 he began attending the School of Fief (Kōdōkan), where he received training in Chinese literature and other classical disciplines. When his father lost his job in fiefdom, he continued his studies with Edayoshi Shin'yō ( 枝 吉 神 陽 , 1822–1862), a representative of the "national studies" ( Kokugaku ), who recognized the primacy of the Tennō and the overthrow of the Tokugawa Shogunate persecuted. Together with other ambitious young samurai of the fiefdom saga such as Ōkuma Shigenobu , Soejima Taneomi , Ōki Takatō and Shima Yoshitake , Etō joined the "loyalty ceremony alliance" ( 義 祭 同盟 , Gizai dōmei ) founded by Edayoshi in 1850 . Under the impression of the landing of the Commodore Perry and the growing urge of the western powers to open Japanese ports, Etō formulated a series of strategies for the economic and military strengthening of Japan in a writing ( 図 策 , Zukai saku ) for the first time in 1853 . a. the opening of the country. After his marriage in 1857 he first worked in the service of the liege lord in Saga, where he was concerned with military and economic problems.

In 1862 he left the fiefdom and made contact with personalities such as Katsura Kogorō ( 桂 小五郎 ) and Anegakōji Kintomo ( 姉 小路 公 知 ) from the fiefdom of Chōshū , where strong forces also built up against the rule of the Tokugawa dynasty. Actually, such an escape from employment was subject to the death penalty, but this was converted into a lifelong withdrawal from public life by the feudal lord Nabeshima Naomasa . Then he worked as a teacher in a small temple school.

After the abdication of the Shogun Tokugawa Yoshinobu in November 1867, Etō was among those samurai from Saga who were committed to building a new state. In 1868 he was sent to Kyōto , the seat of the Tennō, together with Soejima Taneomi ( 副 島 種 臣 ) . In the Boshin War between the supporters of the Tennō and the troops of the Tokugawa he earned great merit as one of the leading figures of the imperial camp. Thanks to the use of Armstrong cannons from Saga, led by Etō, the elite troops ( 彰 義 隊 , Shōgitai ) of the Tokugawa camp were defeated in the Battle of Ueno (July 4, 1868) . The renaming of Edo in Tōkyō goes back to a proposal made by him and Ōki Takatō.

As a result, Etō exerted great influence on a number of posts, especially on the development of the legal system. In 1872 he was finally appointed Minister of Justice. In this office he drove the writing of the first modern canon of criminal law ( 改 定律 例 , Kaitei Ritsurei ). In 1873 he became a member of the "Great Council of State" ( daijōkan ).

In the same year, violent disputes broke out in this State Council over a proposal made by a group around Saigō Takamori to conduct a punitive expedition to Korea ( Seikanron ). When this was rejected, Saigō Takamori, Itagaki Taisuke , Etō and others resigned in protest. Etō returned to Saga, where a group of former samurai gathered around him who, like him, had participated in the fall of the Tokugawa, but were now dissatisfied with the way things were going. In 1874 he founded together with Itagaki Taisuke and Gotō Shōjirō the "Patriot Party" ( 愛国 公 党 , Aikoku Kōtō ), which campaigned for the creation of a national parliament.

Since the hoped-for response did not materialize, Etō and Shima Yoshitake decided on an escalation, which went down in history as the saga rebellion ( 佐賀 の 乱 , saga no ran ). With about 3,000 followers, he brought government offices under his control and attacked local banks in February 1874. The uprising was quickly put down by troops under Ōkubo Toshimichi . Etō first fled to Satsuma, where he hoped for help from Saigō, but was turned away. In Tosa ( Shikoku Island ) there was a similar dissatisfaction with the situation, but there, too, he was given the cold shoulder. While looking for a boat to cross to Tōkyō, where he wanted to commit seppuku , he was arrested - by the police forces he had established a few years earlier.

Although there was some understanding of his motives in influential circles in Tōkyō, Ōkubo Toshimichi put through a process that ended with the death penalty for Etō and eleven other accused. On Ōkubo's order Etō was beheaded and the head was displayed at the place of execution ( 千人 塚 , Sennintsuka , literally "a thousand-man hill"; today Shinrin Park, Saga). For a member of the samurai class this was a disgrace that could not be topped. Photos were taken and sold until the government stopped the activity. Etō's body finally found its final resting place in the Hongyō Temple ( 本行 寺 , Hongyō-ji ) in Saga.

Notwithstanding the relentless suppression of this rebellion, the causes remained. In Kyushu in particular , there was still a great deal of discontent among the former samurai, which culminated a few years later in the Satsuma rebellion under Saigō Takamori.

In 1915 Etō was posthumously pardoned and honored with a court rank .