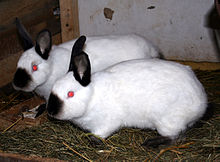 The Californian is a medium-sized breed of rabbit .

Appearance of the Californian rabbit

Californian rabbits, clearly recognizable are the not yet fully developed markings of the young animals

The drawing is determined by the Russian factor, therefore the animals are born pure white and show the phenomenon of cold blackening . Due to the more compact shape, Californians usually show a more blurred drawing than Russian rabbits. The Californian rabbit is said to have a weight of 4 to 5 kg; Animals weighing less than 3.5 kg and more than 5 kg are excluded from the evaluation at pedigree rabbit shows.

History of the Californian Rabbit

The Californian rabbit is named after its country of origin, the US state of California , where it was bred from Russian rabbits , New Zealanders and Great Chinchilla rabbits in the 1920s. George S. West is specified as the breeder. The aim of breeding was a typical farm rabbit with a good meat set, fine bone structure, rapid growth and a thick, as white as possible fur. The greater chinchilla rabbit was crossed in order to achieve the desired thick and soft fur. In 1928 the first animals with a drawing resembling the Russian rabbit and a weight of about 4 kg are said to have been reached. The breed has been recognized in the US since 1939, imported to Great Britain in 1947 and to mainland Europe in the mid-1960s. The breed has been recognized in Germany since 1968 and in the Netherlands since 1966.

Californians are a relatively rare breed of rabbit. Presumably due to the greater weight and the more compact shape, the typical drawing is much less clean than that of the Russian rabbit. Well-colored Californian rabbits usually do not show the required type and have difficulty reaching full weight and vice versa.

The Russian rabbit of the German breed rabbit standard is significantly smaller (weight around 2.25 kg) and slimmer than the Californian rabbit.

The European standard knows a large Russian rabbit with the same weight requirement, which looks a bit slimmer overall and corresponds in type to the Russian rabbit.

In the "Assessment Regulations for Pedigree Rabbits in Socialist Countries", which also applied in the GDR from 1980 until reunification , the Nitran rabbit was recognized, a Czech breed, a medium-sized rabbit with blue markings that is still bred in the Czech Republic today .

The Zobor rabbit was recognized as a new Slovak breed in 2004 . This rabbit corresponds in shape and type to the Californian, but only shows the Russian badge on ears, flower and parts of the hind legs, i.e. H. In contrast to the Californian, it has no mask and white forelegs. With an ideal weight of 4.25 to 5.25 kg (Slovak standard), it is slightly larger than the Californian. The breed originated from crossing the Nitran rabbit with White New Zealanders . The drawing comes from the combination of the Russian factor (agromelanie) with the Dutch piebald , which, covered by albinism , must have been present in the White New Zealanders used for crossing . The cold blackening in young animals leads to an appearance in the form of the Dutch drawing in the Zobor rabbit.

The Zobor rabbit is permitted in Slovakia in the colors black, Havana and blue.

Californian rabbits of the type and color are bred for meat production all over the world without any particular breed characteristics being considered.