The gills (Anostraca) represent an order within the crustaceans . Worldwide more than 300 species from this group have been described, which are mainly to be found in relict habitats such as salt lakes, dry waters or polar waters. Known species of brine shrimp ( Artemia salina ) from inland salt lakes, Branchipus stagnalis from ponds only in the summer and the Feenkrebs ( Eubranchipus (Siphonophanes) grubii ) from melt water and Auentümpeln only in the spring.

The gills reach a body length of about 15 to 30 millimeters, the largest species can be a maximum of 10 centimeters long. The body is elongated and, in addition to the head, consists of a front body (thorax), which supports the leaf bones, and an extremity-free abdomen ( pleon ). The last segment ( telson ) ends in two long tail appendages that form a furca . 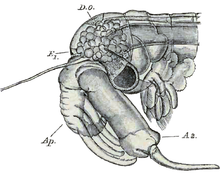 The head of the animals is relatively short and has only a very inconspicuous head shield, as the edge of the same cannot be seen. The 1st antenna is tubular and not divided. The 2nd antennae (A2) are also not structured and have different structures for the sexes ( sexual dimorphism ). In the case of the males, they form large pincers that are used to hold the female in place during copulation. At the base of the 2nd antenna there is also an antler-like extension (Ap), the function of which has not yet been clarified. In females, the second antenna is normally developed and short. The mandible has no leg-like appendage ( palpus ), the 2nd maxilla is only very small.

The 11 pairs of legs of the thorax (17 or 19 in some species) are leaf-like and flat. They are not articulated and consist of a base part ( protopodite ), to which essentially the floating branches and several smaller, leaf-like extensions ( endite and exite) attach. The outer leg ( exopodite ) is also flat and leaf-like, the inner branch is fused with the base. A food channel forms between the two rows of legs. The stroke of the legs is always metachronous, that is, it moves in waves from one leg to the other, starting with the last pair of legs. As a result, particles can get caught between the base of the legs and are filtered out by bristles at the ends and swept into a central channel and sucked forward by the negative pressure that forms. As a result and through the movement of the legs, these particles then get into the oral cavity. In this way, food intake and locomotion are coupled, similar to the Cephalocarida and the clawed tail .

The gills are separate sexes. The females have a clearly protruding egg sac on the ventral side of the last thorax segments (segments 12 and 13). The males have paired penises on the 12th segment as well as the already mentioned 2nd antenna, which is converted into a grasping organ. For copulation, the male grabs a female from below with the 2nd antenna and inserts his penises into the sexual opening of the female.

The gillfish eggs are drought- resistant and can sometimes survive for years without moisture (hatchable Artemia salina eggs are available, for example, in aquarium stores). The embryos form cysts ("encysted gastrula bacteria"), which are extremely insensitive to strong heat, radiation and various solvents. Nauplius larvae hatch from the eggs and develop the total number of segments and all other adult traits over several moults.

Due to the specific structure of the extremities and, above all, due to the functional connection between food intake and locomotion through these "turgor extremities", the gill pods are placed in the leaf crabs (Branchiopoda). According to an alternative relationship hypothesis, in which the higher crustaceans are located within the leaf-pods, the gill-pods, as the most original group, represent the sister group to all other representatives.

The more than 300 scientifically described species of the gillwort are divided into the following 8 families in 26 genera: