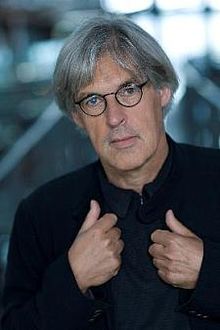 Klaus Martens (born May 18, 1954 ) in Uedem is a German journalist , filmmaker and book author.

Klaus Martens works as a freelance writer and producer in Cologne. Until his retirement in February 2020, he was a permanent editor and author in the Inland program group of Westdeutscher Rundfunk (WDR). After studying political science, history and philosophy (MA), his first WDR station was the program Here and Today . Klaus Martens then worked in the culture / history departments, in the editor-in-chief and in the international program group.

Martens was part of the founding team of the ARD morning magazine . In 2001 he switched to the editorial team of Die Story . In his documentaries, for which he has received numerous awards, he focuses on economic topics.

On May 14, 2010, the WDR released Martens from service due to alleged violations of the WDR's programming principles and false information given to the WDR in connection with its feature healing undesirable (2009, see below) and its subsequent book publication and initiated legal action. In connection with the documentation, doubts about Marten's independence had been expressed in the case, and the director accused Martens of breach of trust. However, the Cologne Labor Court overturned the termination on January 20, 2011. According to the court ruling, the allegations against Martens turned out to be largely incorrect after review. Due to Martens' previously renowned journalistic work, the reasons for an immediate dismissal were not sufficient. On October 5, 2011, the regional labor court proposed a comparative dispute settlement. It "strongly" suggested continuing the employment relationship and continuing to employ Martens in a different editorial office or in another area of ​​responsibility before it would pass a judgment on the matter itself. On December 14, 2011, the judgment of the Cologne Regional Labor Court (Az. 3 Sa 347/11) was that the termination without notice was ineffective and did not allow an appeal.

As the author of a film about the takeover of Mannesmann AG by Vodafone , Martens received the Johanna Quandt Foundation's media prize in 2002 . His story The Invisible Third was nominated in 2005 for the Ernst Schneider Prize . His documentation banking secrets was awarded the Helmut Schmidt Journalist Prize 2005 and the Ernst Schneider Prize 2006.

He received the European Civis Prize 2008 for the television documentary Death Voyage in a Fishing Boat and the DUH Environment Media Prize 2008 for Der Störfall . For the one-hour film Nightmare in a Fishing Boat - Africa's Refugees and Europe's Fisheries Policy , he received the film prize of at the Protestant Church Congress in Bremen Evangelical Development Service 2009 on Sustainable Germany in a Globalized World .

On October 19, 2009, the ARD broadcast Martens' 45-minute documentary Healing Unwanted - How Pharmaceutical Companies Prevent a Drug . The subject of the film is the story of an ointment containing vitamin B 12 for the treatment of atopic eczema (neurodermatitis) and psoriasis (psoriasis) and the unsuccessful attempts to win a large pharmaceutical company to manufacture and market the ointment as a drug. The film documents the history of the invention, development, patenting and testing of the agent and the unsuccessful contacts with several pharmaceutical companies largely through interviews and statements from the people involved. The film comes to the conclusion that companies in the pharmaceutical industry have refused for years for strategic reasons to produce and market an inexpensive and effective product, although they had no doubt that it could have helped many of those affected. At the same time as the film was broadcast, a book on the film was announced, which was released on November 5, 2009.

The documentation initially met with positive, but then also with very critical media coverage. Some newspapers, including the Frankfurter Allgemeine Zeitung FAZ and the Süddeutsche Zeitung , followed the statement made by Siegfried Throm, managing director of the research-based pharmaceutical company, on the show Hart but fair: Martens was running a PR campaign. After the film was broadcast, it became known that the patent owner had found a sales partner in the Swiss company Mavena Health Care AG who wanted to bring the cream onto the market. The fact that the patent owner wanted to bring the cream onto the market "on his own" was certainly an issue in the film. In an interview, the representative of a sales company from Kleve in the Lower Rhine region, who announced the market launch. It was criticized that the studies carried out were too small to prove beyond doubt the effectiveness in atopic dermatitis and psoriasis, as claimed in the film. The title "Unwanted cure" has also been criticized as misleading. In fact, neurodermatitis is considered incurable. The dispute over the film led to labor law proceedings between Martens and the WDR, which Martens won both in the first and in the second instance before the labor court .

On October 29, 2009, Martens 45-minute film Teacher from Passion was broadcast in the series People Up Close on WDR television . For this documentation 90 teachers were observed at an Overather high school for one year. A large part of the documentation shows what is happening in the staff room, occasionally contrasted with quotes from Theodor Adorno's taboos about the teaching profession . PHOENIX first broadcast a 60-minute version entitled Teachers' Room - A School Year on January 19, 2013.

"Wir die Wand" is a 90-minute documentary that Martens shot with a team of 50 in one day. The film is a WDR in-house production and portrays the south stand in the football stadium in Dortmund during the football game against Mainz on April 20, 2013. A total of 16 cameras monitor the action on the largest standing stand in Europe without showing a single game scene on the football field itself . The documentation is based on the thesis that among the 25,000 people in the stands come together from all walks of life. Eleven of them are accompanied by a camera when they enter the stadium and watched until the end of the game. The protagonists tell their stories both directly into the camera and "off-screen". Director Martens asked his protagonists in long interviews in front of the microphone. The documentary was shown for the first time in September 2013 in German cinemas and in October 2013 on WDR television.