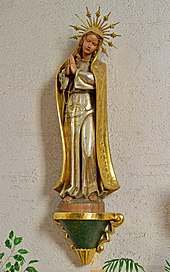 Klothilde Rauch worked in the Jakob Adlhart studio and later became a freelance sculptor and restorer. Her workshop was in Altmünster , where she created and restored numerous sacred works of art. She was a member of the Krippenfreunde Salzkammergut .

Rauch had a fatal accident near Krems an der Donau in 1990 . She was buried in Altmünster .