The title of this article is ambiguous. Further meanings are listed under Kolk (disambiguation) .

The Kolk , regionally also Kulk , is the name for small water-filled depressions.

On the one hand, there are vortex holes (so-called scouring ) on the bottom of current or former flowing waters and on the other hand, lakes in moors. The term is mainly used in the originally Low German- speaking area and overlaps in the meaning with Gumpe , which is more common in the southern German-speaking area and mainly refers to excavations at the foot of waterfalls.

At the bottom of flowing waters 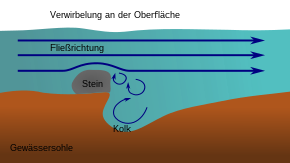 Scheme of scouring in a river bed made of loose material

Former scour of the Rhine in gravel ( Wuhrloch in Neuchâtel ) 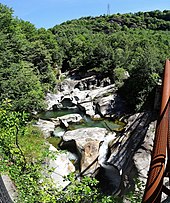 A pool (also known as a whirlpool hole or, in solid rock, whirlpool pots ) is an erosion phenomenon in a river bed in the form of a depression in the river bed or the bank wall. Triggers can be irregularities in the strength of the subsoil or flow obstacles such as tree roots or stones in sand and gravel beds . Pools also arise in solid rock due to the fluvial dynamics of the watercourse. The sand and rock fragments carried along abrade the river bed, causing the river to erode the rock. Funnel -shaped or bowl-shaped depressions are formed by vortices and water rollers. The scouring activity of flowing water is called evorsion , the initial form of a scouring whirlpool .

A pool of water in the middle of a rain or boiler bog is also referred to as a pool , which is also called a bog eye . High moor colts are mostly secondary to the acidic effect of the peat moss . Their bank vegetation differs from other structures of the bog and is formed on a more or less thick layer of peat. The smaller Schlenken are to be distinguished from this .

Scouring is also caused by washouts after a dike breach ; on the coast during storm surges , on rivers due to floods. These pools, created by the breach of the dike, are also called bracks or wehlen and can be very deep.

Pools also form on the underwater foundations of bridge structures that span rivers or straits, or of offshore structures such as wind turbines. Especially in shallow, tidal coastal waters, the current leads to scour formation.

Even on a stranded ship, a scour often forms in a very short time, which leads to breakage and thus to total loss before salvage measures can be initiated. One example is the loss of Fides in 1962 in the mouth of the Elbe.

Washouts can be particularly deep beneath weirs . For this reason, a fortified stilling basin is usually built at the foot of an overflowing barrage . However, falling water is more of an artificial pool than an artificial pool.

The Larrelter Kolk near Emden was created during the Christmas flood in 1717 , which broke through the dike for a long time. The newly formed water area had the dimensions of about 500 m × 100 m and was 25 meters deep. Despite the restoration of the broken dyke, the dyke broke again in 1721, which left further ponds 15 to 18 meters deep. In 1825 the February flood near Emden created a scour 31 meters deep. From here the soil was swept up to five kilometers inland.

The buildings on Berlin's Museum Island were erected from 1830 over ice-age pools in the Berlin glacial valley . The swamp-filled depressions had already been covered with layers of sand several meters thick during the Ice Age, which solidified sufficiently to support vegetation and later settlements. The ponds remained hidden until the subsoil investigations for the museum buildings. Parts of the museum building were then erected on wooden piles that were up to 20 meters deep in order to reach solid ground.