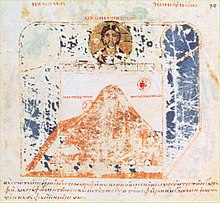 The world view of Cosmas Indicopleustes: flat earth in a tabernacle , 6th century

Kosmas Indicopleustes ( ancient Greek Κοσμᾶς Ἰνδικοπλεύστης Kosmás Indicopleústēs "Kosmas the Indians") was a late antique writer and traveler from Alexandria and contemporary of Emperor Justinian I. The real name of the author is unknown; from around the 9th century he was called Kosmas Indicopleustes .

The author was a Nestorian Christian and traveled as a merchant to the Black Sea , Arabia and East Africa ( Aksum ); Whether it also reached Sri Lanka and southern India is a matter of dispute in research. Around 550 he wrote his Χριστιανικὴ Τοπογραφία ( christianiké topographía , Christian description of the world ) in twelve books, the purpose of which was to refute the Ptolemaic conception of the earth as a sphere. He probably also took a stand against the Christian Aristotelian Johannes Philoponos . Kosmas developed his conception of the world from the Old Testament , especially from the creation story and based on the tabernacle . He imagined the earth as an elongated square surface, over which the universe rose as a two-story vault with the sky above as a roof. In the middle rises the mountain of the north , which is circled by the sun and whose shadow causes the night. To the south is the known world, to the east, across the great ocean, is paradise. The angels move the stars and daily push them behind the mountain, where they are hidden from the view of the people.

The value of his work lies in his geographical, scientific and cultural-historical excursions, in which the traveler Kosmas records his observations and the experiences of others. It influenced several other Byzantine works and is also an attempt to interpret natural events from a fully Christian point of view.